The Fido Behind #FindYourFido Finds a New Home in Maine

Before Mikey, a four-year-old brindle pit bull-mix, was adopted by Trisha and Jim W. of Guilford, Maine, he was the face of the national ASPCA campaign called #FindYourFido, which helped thousands of homeless dogs get adopted during Adopt a Shelter Dog Month last October.

“Fido represented any shelter dog in any city or town,” explains the ASPCA’s Jody Salbo, Director of Business Management and Operations at the ASPCA Adoption Center. “Fido could be big or small, fluffy or sleek, lazy or playful—but most importantly, every Fido needs a home.”

As part of the campaign, the ASPCA sent a life-size cardboard cutout of Fido (a.k.a. Mikey) across the country with “virtual fosters,” to highlight the many benefits of adoption and raise awareness about the 3.2 million dogs who end up in shelters every year. Fido’s fosters, who included shelters, celebrities and other partners, shared photos of their exciting adventures with him on social media. Potential adopters following Fido’s journey could also visit the campaign’s website to check out profiles of adoptable dogs in their communities. 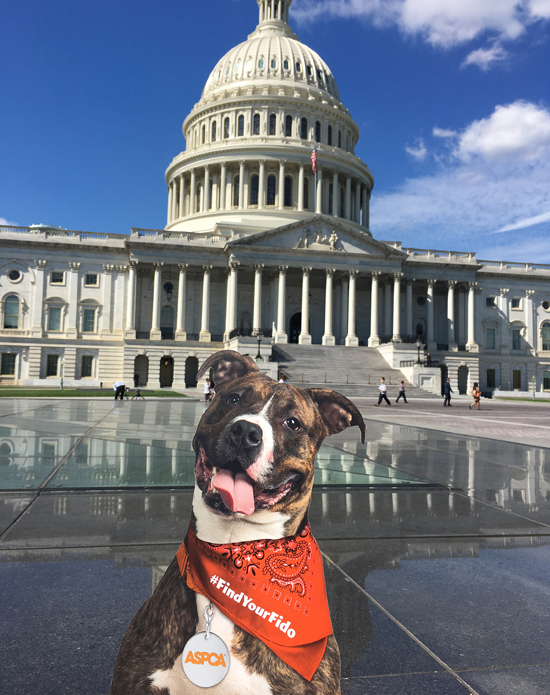 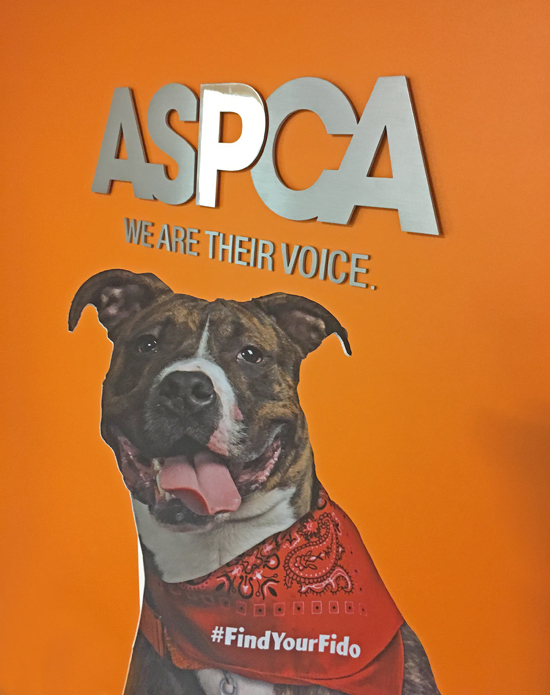 Fido visited some of the country’s most iconic landmarks, including the Empire State Building and the Capitol Building!

In total, 750 animal shelters in 47 states joined in on the movement. The participating shelters reported an average increase in adoptions of seven dogs per shelter, totaling more than 5,200 adoptions nationwide.

Mikey turned out to be the perfect Fido! His own search for a safe, loving home mirrors that of many shelter animals. The sweet dog came to the ASPCA late last March after being transferred from Animal Care Centers of New York’s Brooklyn location, where he’d arrived as a stray. At the time, his right hind leg was broken, so veterinarians at the ASPCA Animal Hospital repaired it, and Mikey recuperated in a foster home. After his injury healed, Mikey was chosen as the face of the #FindYourFido initiative.

During the campaign, a six-foot Fido sat at the ASPCA Adoption Center.

“Mikey fit the description of what we were looking for: A larger dog, preferably a so-called ‘bully breed’— the type most at-risk in shelters,” explains Jody, who worked with the Adoption Center and Media & Communications teams to find the campaign’s Fido.

“Mikey also turned out to have some of ‘America's Next Top Model’ in him, because he held the perfect endearing pose to snag the role of Fido,” adds Natasha Whitling, Director of Media & Communications, who, with her colleague Rebecca Goldrick, were part of the team that created the campaign.

That charm eventually helped snag Mikey his own home as well. He was transported to the Bangor Humane Society in Maine late last summer, after having had no luck meeting the right adopters in New York.

That’s where Trisha and Jim, dog lovers who were actually leaning toward getting a puppy, first met him.

“The pups we had in mind weren’t good matches for us, so Jim noticed Mikey and suggested we take him out for a walk,” recalls Trisha. “He really was cute, and I love when his one ear is up and the other is down.”

The Whites adopted Mikey the day they met him, and he soon settled in to their house, which sits on 81 acres and offers him—and other creatures—plenty of room to run.

“He’s good about not chasing the deer, and he comes when called,” says Trisha.

“He never leaves our sight,” adds Jim, who loves playing with the 89 lb. Mikey.

Indoors, Mikey has plenty of toys and blankets, but his favorite spot is a recliner he took over not long after moving in. “We relinquished our rights to it,” laughs Trisha.

Mikey lounges in his favorite chair.

Self-employed and with an office just seven minutes away, Trisha says Mikey is never alone for more than three or four hours at a time. He follows her around the house, and when he sees her getting ready to leave, he gets into his crate.

“He’s a big baby and can be super gentle,” Trisha tells us. “He lets me put treats in his mouth and drops his favorite ball at my feet. I really enjoy talking to him and having him around.”

Mikey also enjoys playing with Jim’s and Trisha’s eight-year-old grandson and “gets along” with Sammy, the resident cat. 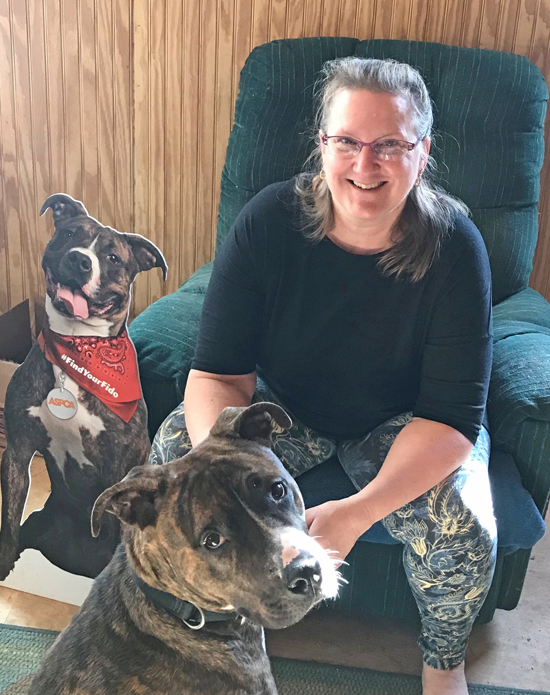 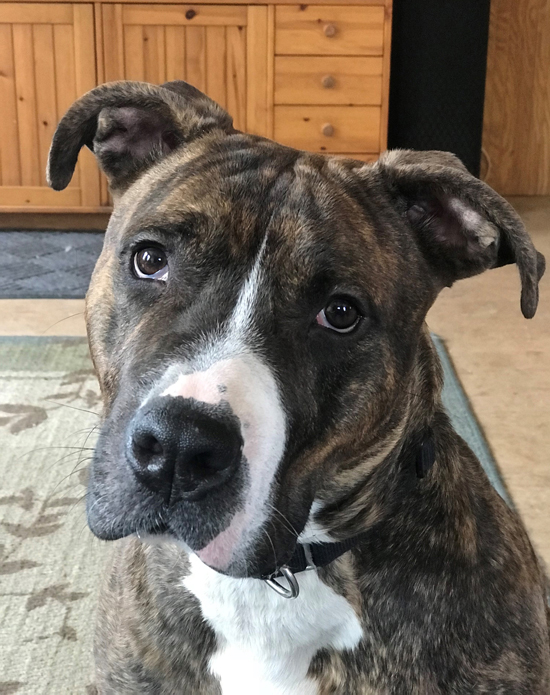 While the Whites aren’t letting Mikey’s prolific presence and influence in shelters and on social media change their view of him, they do recognize how fortunate they are to have found this Fido.

“We have the real thing,” says Trisha.