Throughout the month of October, the ASPCA encouraged shelters and animal lovers across the nation to join our #FindYourFido movement, a month-long campaign to celebrate Adopt a Shelter Dog Month and help homeless dogs everywhere get their second chance.

During this time, we sent our very own Fido—a life-size cardboard cutout ambassador for shelter dogs—across the country with “virtual fosters,” to highlight the many benefits of adoption. Now that Fido can finally “sit,” and “stay” in one place, we’d like to share with you some of the highlights of this incredible month, and what an impact we were able to make.

Hundreds of shelters participated nationwide. We saw Fido pop up in 47 states, including Ohio, Idaho, Nevada, Texas and New York!

Influencers, celebrities and elected officials took part, recognizing the importance of this life-saving campaign. Social media influencers and popular accounts geared toward animal lovers like @thedogist, @dogsofinstagram and @marniethedog, helped spread the word, while celebrities like Laura Dern, Kristin Chenoweth, Sarah Hyland and Ashley Greene (among others) took to their personal social media accounts to let their fans know just how important adoption is. The NYC Mayor’s Office also took to social media in support of Fido!

Actress Ashley Greene and her pups posed with Fido and posted a message about the importance of adoption.

Marnie the Dog took to her Instagram account to show some love to shelter dog friends with the #FindYourFido tag. 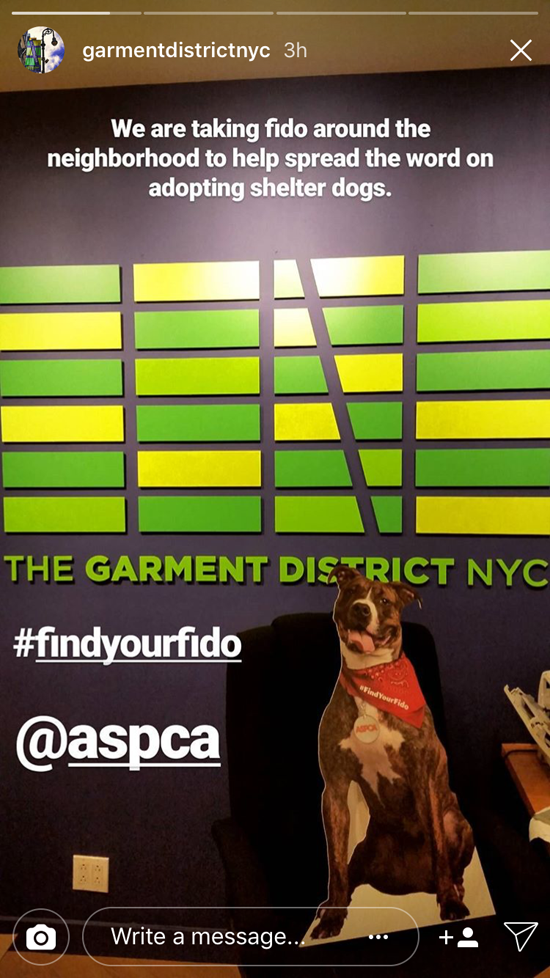 The Garment District NYC took Fido around for a tour of the popular New York City neighborhood!

The Dodo was the official media content partner. They highlighted adoptable dogs, held Facebook Lives and promoted the importance of dog adoption throughout the month of October.

Though this exciting campaign has ended, we encourage you to continue to spread the Fido message and to always make Pet Adoption Your First Option. The ASPCA has plenty of furry friends waiting for homes at our Adoption Center, or you can find your perfect match at your local shelter.