Waiting for Love: One Senior Cat Gets a Home for Her Golden Years

“Natalia has only reaffirmed my conviction that it is important to adopt senior pets and give them a second chance at a happy life.” –Mary H. of Brooklyn, NY

Natalia’s journey began with us back in April 2010, when the then five-year-old cat was transferred into the ASPCA Adoption Center from a local, overcrowded shelter. Though it wasn’t long before the pretty cat found an adopter, she was returned to us in July 2010, only a few months after her adoption, when she did not get along with her adopter’s resident pet. Less than a month after her return, Natalia again went to a new home, and everyone hoped that this time, it would be the perfect fit.

Unfortunately for Natalia, this would not be the happy ending we had all hoped for. Four years later, in September 2014, Natalia came back to the Adoption Center after she’d been found as a stray by another local shelter. Though we tried to contact her previous adopter, we were never able to determine how Natalia had ended up on the streets again.  Though the circumstances through which Natalia was returned were not ideal, the team at the Adoption Center was relieved to see her safe and sound. Everyone was more than happy to welcome the sweet cat back into their care, and they were determined to find a permanent, loving home for the now nine-year-old cat.

By this time, Natalia had begun to show her age. Her teeth had all fallen out over the years, and her personality reflected that of a sensitive, older senior. Though she was sweet and affectionate, Natalia was sensitive to certain human interactions and needed someone with a lot of patience and understanding. These personality quirks were most likely due to the traumas and lack of stability in her past.

Over the next year, Natalia spent some time in our Office Foster program, which enables some of our more sensitive, long-term residents to live in the offices of ASPCA team members. Living in an office gives cats like Natalia, who may not have a lot of experience living in a home, the chance to have a more sociable and domestic living space, giving them an opportunity to come out of their shells.

In this time, Natalia’s personality was able to shine through, and she started to become more trusting. It seemed that with all the love Natalia had to give, a loving home couldn’t be far off. Luckily, this was absolutely true. In what was described to us as a “poetic coincidence,” on New Year’s Eve 2015, Mary H. came to take Natalia home—for good.

Mary had spotted Natalia’s photo on the ASPCA website, and tells us that the photo and description of the sweet cat broke her heart. “She had been in and out of care with ASPCA for almost eight years, so I imagined she was in great need of a permanent home,” Mary tells us. Mary says that she knew she wanted a senior cat, one with special needs who may need some extra love and care, but she wanted to ensure that the timing was right. “I love animals, and I think most of us can benefit from the joy and energy that they bring to the home. I had wanted to adopt a cat for about a year, but did not feel that my schedule was stable enough to care for one. After a month of self-determined stability, I knew I was ready to adopt.” 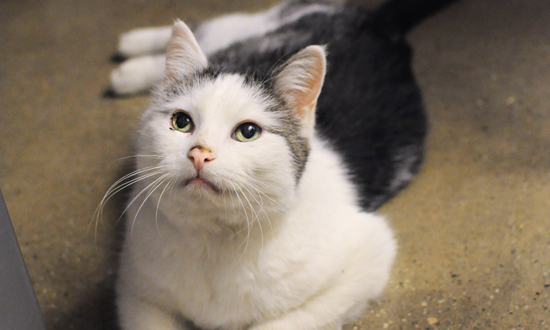 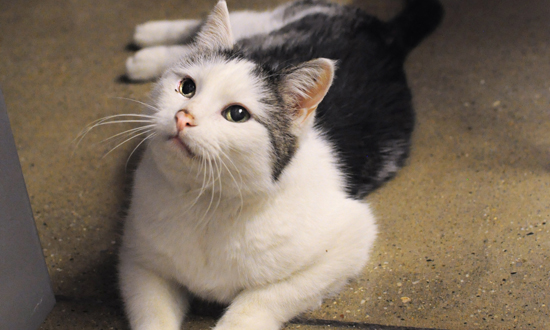 After making the adoption official, Mary and Natalia settled into a new year and their new life together. Mary tells us that initially, Natalia loved her new space, but that she took her time connecting to Mary. “It took longer for us to build a relationship in which she was content, about three to five months,” Mary says. “For a much longer time than that, Natalia had trouble interacting with new people, often clawing at them after a few pets. But she has become significantly more relaxed and is becoming much friendlier now, too.”

It seems that all Natalia needed was time to adjust in her own way. With Mary, Natalia had all of the time she needed—this home was one full of love, patience and most importantly, permanence.

When asked about what advice she would have for someone who may feel apprehensive about adopting a senior pet, Mary had this to say: “Senior pets need love, too, though of course it is important to be aware that they may require additional veterinary attention. If you are capable of caring for them but still unsure of your decision, think of the miraculous impact you will have on this defenseless animal's life!”

November is Adopt a Senior Pet Month, and you can create a Happy Tail just like Natalia’s and Mary’s by opening your heart and your home to a sweet senior. In New York City, older cats like Henson, Aurora and Fredrika—along with many others—are waiting for someone to give them a chance. Not local to New York? Search our database to find available senior dogs and cats near you! We hope that this November, you’ll kick off your holiday season by giving a special senior the best gift of all—a loving home.