From Abused to Adored: How Resilient Harper’s Life Was Changed

Amanda E. and her boyfriend, Ted, had wanted a dog for years. In fact, it was a running joke that whenever Ted had a surprise for Amanda, she would ask if it was a puppy.

Their major hesitation in adopting was that they both worked long hours and wanted to make sure they would have enough time and energy to put into a deserving dog, especially during the first few weeks after adoption. However, when the COVID-19 pandemic hit, Amanda and Ted had more time on their hands. Now was the perfect time to adopt the dog they had been dreaming of for years.

With this newfound down time, Amanda and Ted began their search.

“I always had a very high opinion of the ASPCA,” Amanda tells us. “We’ve lived near the 92nd Street location for years and regularly saw how gently and respectfully the dogs were handled on their daily walks.”

Amanda started the adoption application process and had a phone call with ASPCA Matchmaker Megan Flores to discuss dog adoption. Unfortunately, there weren’t any dogs that Amanda and Ted felt they could provide the right home for at that time.

“Megan told us not to give up, and over the next few months reached out about a few different dogs that might have been a good match," Amanda recalls. “Then one day Megan sent me an email about an almost five-month-old puppy named Harper who was ready for adoption.”

“She [Harper] seemed ready for a new start at life, and she was just waiting for the right family to come along and give her a chance to blossom in their home,” Megan says.

Head Over Heels in Love

Harper was brought to the ASPCA with a severe head wound consistent with suspected cruelty. After undergoing surgery and recovering at the ASPCA Animal Recovery Center, Harper was ready for adoption. Harper is just one of the hundreds of vulnerable dogs we see each year in need of care, protection and rehabilitation. Thankfully, our incredible veterinary and care staff were able to give Harper everything she needed to heal and make her way toward a loving home.

“Megan sent us a photo of a little pup with a scar across the top of her head who was wearing an oversized t-shirt and the goofiest grin,” Amanda says. “We knew we had to meet her.” 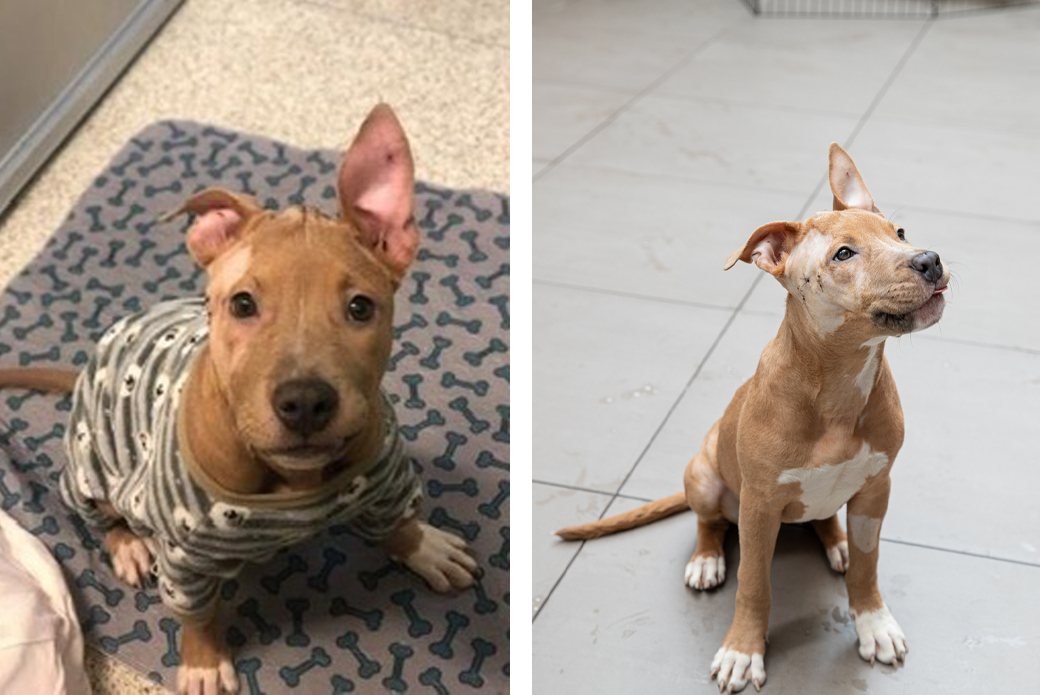 When Megan first spoke to Amanda, she knew she would be a great adopter after discussing her overall experience with owning larger breeds and managing the behaviors that come with having a high-energy, large dog.

“When miss Harper became available for adoption, Amanda was the first and only person that came to mind,” Megan recalls. “She was looking for a friendly dog between the ages of one and five that could handle a six-flight walk-up and was friendly and social—Harper fit the bill!”

Soon enough, Amanda and Ted found themselves at the ASPCA Adoption Center, waiting for the elevator doors to open and meet the dog they had already fallen in love with.

“Harper came prancing down the hallway,” says Amanda. “She was taken off leash and came barreling to the room, sprinting around in circles. As she was running, she stumbled and literally fell head over heels into my lap, where she stayed to cuddle while her tail shot back and forth at top speed. At that moment, I knew it was love! Despite her rough past, she was so happy and goofy, and she was going to be our puppy.”

Starting Her Next Chapter

Amanda and Ted returned to the Adoption Center a few days later to take Harper home and officially adopt her. They were given two bags filled with treats, food and toys that the ASPCA staff had prepared for Harper’s departure.

Before leaving for her new home, the staff gave Harper a hallway parade—they lined the halls, cheered for her and showed her lots of love.

When Amanda, Ted and Harper got to their apartment, Harper settled in within minutes, going straight to her crate followed by some zoomies up and down the hallway.

After getting to know Harper better, Amanda and Ted renamed her Roxy.

“It’s our little tribute to how she stayed strong and resilient—like unbreakable rocks—despite the trauma in her past,” Amanda explains.

Megan, who has been a Matchmaker for two years and has worked at the ASPCA for four years, refers to Roxy’s case as “one of the most memorable and fulfilling adoptions” she’s done.

“She remained a loving, happy, playful and social puppy that simply loved and accepted everyone she met while at the ASPCA. With dogs that have come through traumatic hardships, that’s not always the case, but she is a perfect example of pushing forward through hardships because there is indeed a pot of gold at the end of the rainbow—and Amanda is Roxy’s pot of gold. And I’m sure Amanda feels the same way about her.”

Life as a Family

Five months after adoption, Roxy has grown into a 52 lb. “bundle of love who has yet to meet a person, animal or thing that isn’t instantly her best friend.” Roxy has found that she loves going to the vet, eats peanut butter every chance she can get and absolutely loves finding and bringing home sticks to destroy.

Amanda and Ted take Roxy to Carl Schurz and Central Park in Manhattan almost every day.

“She’s quite good at chasing down tennis balls and frisbees, though less good at giving them back,” Amanda jokes.

Roxy even went through a dog training class and earned herself a diploma that her parents proudly display on their refrigerator. Now, if people run into her on the street, she will happily show off her roll over and paw tricks, but only after she jumps into their arms for hugs and pets!

“It was clear the day we brought her home and it’s clear now in Roxy’s love and desire to be loved, how much her time at the ASPCA helped shape her. We are so grateful to the staff at the ASPCA for the love and care they gave our puppy before she came home.”