Two years ago this month, the United States Department of Agriculture (USDA)—the federal agency responsible for the licensing and oversight of certain commercial dog breeding facilities—removed tens of thousands of animal welfare inspection and enforcement-related documents from its publicly accessible database.

The USDA has continually assured the public that its animal welfare records are still available via Freedom of Information Act (FOIA) requests. However, the agency’s responses to our many requests strongly contradict its promise.

Here’s an example of a typical FOIA response consisting of a photo and breeder inspection report submitted by a USDA inspector last February. The pictured four-month-old female German Shepherd was living in a facility in Indiana along with approximately 50 other dogs. The inspector noted that the dog’s collar had been left on while she was growing and became too tight, causing the collar to break the skin and bite into the muscle tissue of her neck. There was yellow and green infected mucus oozing from the wound accompanied by a very strong odor. In this case, the licensee was unaware of the injury, so a veterinarian had not been contacted. 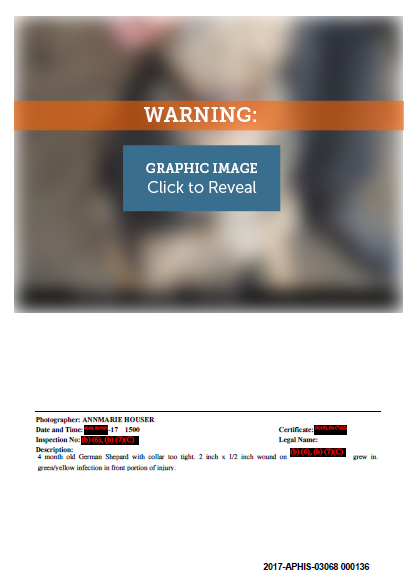 We can show you the photo of this puppy and tell you her condition as documented by the federal inspector, but due to the relevant information being blacked out, we cannot tell you which breeder did this to the dog or whether the USDA took any action against the breeder.

Why is the USDA protecting cruel breeders over the animals and consumers it is entrusted to protect? The ASPCA will not stand for this agency’s delays and deliberate omissions, nor the cruelty enabled by its irresponsible actions. Last May, we filed a lawsuit against the USDA in response to its ongoing refusal to respond to our requests as required by law and for its failure to release crucial animal welfare records in their entirety. Please help by signing our petition demanding the agency give back public access to this lifesaving information.