Someone is looking out for America’s dogs, right? Isn’t some arm of our government responsible for making sure the dogs languishing at factory-like breeding facilities aren’t being horribly abused?

Sort of … but not to the extent you might think.

It’s one thing to read about puppy mills—but it’s an entirely different thing to see them for yourself. The United States Department of Agriculture (USDA) conducts inspections of federally licensed dog breeders. During these inspections, USDA inspectors document, photograph and record violations. View our gallery of inspection photos provided by the USDA to see how dogs in licensed breeding facilities are really treated.

What Is the U.S. Government Doing?

The commercial breeding of dogs is regulated on the federal level, and some states have their own additional requirements. Federal law requires certain businesses that use animals—like zoos, research institutions and commercial pet breeders—to meet minimal animal care standards found in the Animal Welfare Act (AWA). The U.S. Department of Agriculture (USDA) is responsible for licensing these businesses and inspecting them to make sure they comply.

Dog breeders who breed puppies to be sold as pets must be USDA-licensed if they have more than four breeding females and sell puppies wholesale, or sight unseen, to pet stores, brokers and/or online. But being “USDA-licensed” isn’t something to brag about—these standards leave a lot of room for dogs to be severely mistreated, and enforcement is abysmal.

There are about 2,000 federally licensed dog breeders in the U.S. [map]. There are also many cruel breeders who manage to avoid government oversight, either because they operate under the USDA’s radar or because they aren’t subject to oversight by the USDA under federal laws and regulations. Those that are licensed must meet the USDA’s minimum standards of care … but do they? When breeders are actually inspected, the findings don’t always carry much weight because even breeders with severe violations regularly go unpunished.

Here is the agency’s internal audit, a scathing report [PDF] on how bad the enforcement problem is.

And here is an example of the USDA failing dogs in puppy mills. For months USDA inspectors witnessed Golden Retriever #142 suffer in an Iowa puppy mill. The USDA was supposed to protect her but instead they did nothing, and she died in that puppy mill. "Goldie" is the name she was given after her death. In her honor, a federal bill has been introduced–Goldie's Act–to hold the USDA accountable for doing its job. Animals kept under our federal government’s authority must never be left to suffer and die. Passing Goldie’s Act will help ensure the USDA is doing their job and protecting the animals in their care, and it needs your support.

What Are the USDA’s Care Standards for Dogs?

The animal care standards that USDA-licensed breeders have to meet are shockingly low. They are merely survival standards, designed to keep adult dogs just healthy enough to reproduce. For example, a dog can be kept for his entire life in a tiny, wire-floored cage that’s stacked upon other cages and only six inches longer than he is in each direction. Female dogs can be bred at nearly every opportunity, churning out litter after litter of puppies with little to no opportunity for their bodies to rest and recover.

These lax standards lead to a lot of animal suffering. As you can imagine, there’s not a lot of stimulation inside the tiny, crowded cages. There’s no playing fetch or tossing toys around—in fact, there’s no requirement that dogs have any exercise or socialization with other dogs or people. In USDA’s own words [PDF], “Inspectors will never write a citation for ‘improper socialization’,” though USDA goes on to acknowledge: “Improper socialization and prolonged confinement may lead to stereotypic behaviors, which are seen as constant and repetitive actions such as: spinning, pacing, excessive licking of paws or legs, excessive barking, fearfulness/aggression.” 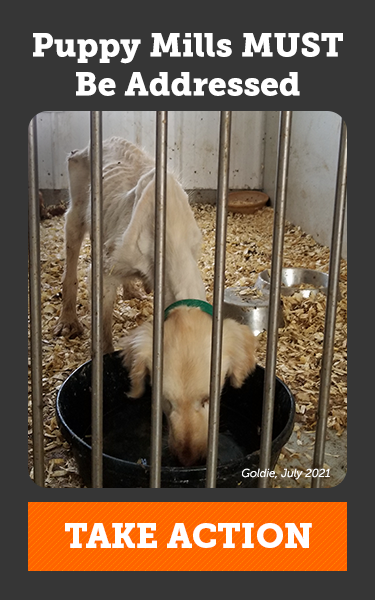