Tomato’s Trek from Neglect to Adoption

After losing her last two cats to old age and sickness, Maggie K. missed having a feline companion, so she began to foster kittens.

She also searched for a cat to adopt and was drawn to the profile of a young, one-eyed, brown tabby at the ASPCA who has a neurological disorder.

“I don’t mind cats who are a bit of work—or a bit different,” says Maggie, who wanted a cat who could get along easily with the foster cats coming in and out of her home. “I was willing to welcome a cat with a disability.”

Left: Tomato at home; at right, recovering at the ASPCA.

Maggie, who has a neurological disorder that occasionally makes her a little wobbly, felt a unique connection to Tomato.

“It was a coincidence, but everything else in Tomato’s profile seemed like she would be a good fit,” Maggie says.

Tomato was one of 30 animals, including 10 cats, seized from a residence in Queens on November 26, 2021. On December 22, the ASPCA and NYPD supported the seizure of another 31 animals. The NYPD and ASPCA have seized animals in previous years from the same owner.

Dr. Alison Liu, an ASPCA Forensic Veterinarian, was on the scene of the second seizure in December to assess the animals’ living conditions.

“There was a strong odor in the home, along with high levels of ammonia and dirty surfaces everywhere,” says Dr. Liu, who was outfitted with a respirator.

During her initial examination by Dr. Liu, Tomato was found to be underweight with a dirty hair coat.

“She had an ear infection and ear mites that caused her intense pain and itchiness—a common issue with cats in overcrowded populations receiving inadequate basic care,” Dr. Liu says. “She also had neurological issues, probably stemming from her untreated ear infection. Her head tilted and she walked in circles with an uncoordinated gait and wobbly legs. That was concerning because her lack of balance could affect her quality of life.”

Tomato during her initial exam.

According to Dr. Lindsay Thorson, an ASPCA veterinarian who helped treat Tomato, the corneal scarring in Tomato’s eyes likely resulted from previous untreated infections. In addition to the scarring, Tomato’s left eye was abnormally small and suspected to have ruptured prior to arriving at the ASPCA.

“Her left eye was removed to prevent future complications and discomfort,” says Dr. Thorson. “Thankfully, despite the scarring, Tomato can still see out of her right eye, though her vision is limited on her left side.”

Despite Tomato’s medical issues, her sweet demeanor helped fast-track her into a foster home.

“Tomato was sometimes quiet and reserved, potentially due to her medical issues,” says Marny Nofi, Director of Feline Behavior with the ASPCA Behavioral Sciences team. “But she clearly enjoyed interacting with the cats she met. She enjoyed being around people and would greet people at the door of her cat condo.”

Kevin K., one of Tomato’s foster caregivers, was working from home like many others during the pandemic and longed for a companion.

“I felt inspired by the ASPCA’s mission and wanted to be a part of it,” says Kevin, an admission specialist at Columbia University. “With Tomato, it felt like the time was right. I could provide supervision 24-7.”

Though he has worked with cats before, Kevin says fostering Tomato was his first experience with a special needs cat.

“It wasn’t a burden in any way,” says Kevin, who looked after Tomato for three months. “I learned so much about her, and she stayed strong and active no matter what.

“I believe her balance significantly improved during her time with me,” Kevin says. “She is unique in many ways and seems to have a sixth sense of awareness of everything. She never misses a beat.”

Joining a Family of Felines

After a Zoom encounter with Kevin and Tomato, Maggie adopted Tomato on May 11. One thing is for sure—Tomato will never be lonely.

“Tomato will likely always have another cat or kitten around,” says Maggie, who has fostered more than 20 cats and currently has a foster cat named Cricket in her New York City apartment. “I thought it would be harder than it is—fostering and then letting go, but I love the challenge of socializing cats.

Left: Tomato, (at right), with Cricket, a foster cat. Right: with another foster, Madison.

“There’s something so rewarding about these tiny kittens who will hiss at a water bowl—like Cricket did—and then transform into such loving creatures. That makes it worthwhile.”

Maggie, who sometimes calls Tomato “Captain Tomato” for her pirate swagger and one-eyed loving stare, advises would-be adopters to be specific about what they’re interested in, but also to keep an open mind for unique connections and compatibilities like she has with Tomato.

“There is a cat for everyone,” she says. 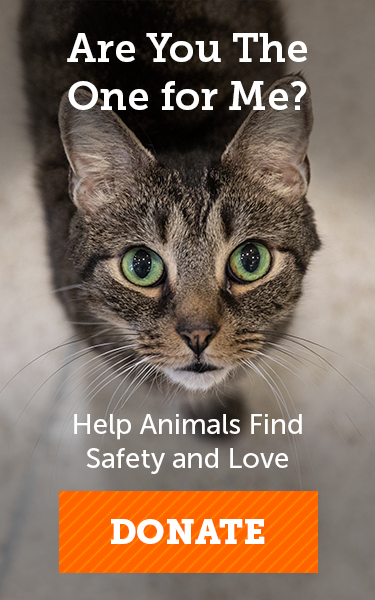