Third Time’s a Charm for Athena

After a year of grieving the loss of their terrier, Kristina P. and her family knew they were ready to bring another dog into their New Hampshire home. What they didn’t know, was how the dog they found would improve the entire family’s lives.

While searching the ASPCA website, Kristina and her family were drawn to a two-year-old hairless terrier-mix named Athena. “She looked sweet and unique in photos. That initially drew us into start the adoption process.”

When Hard Work Pays Off

Athena was a unique dog the ASPCA Adoption Center staff knew well. Through no fault of her own, this shy girl was adopted and returned twice over two years. But everyone at the Adoption Center was committed to finding the perfect home for Athena to call her own.

While waiting to find her perfect match, Athena lived in foster care where she worked through some sensitivities and minor behavioral concerns that brought concern about whether Athena could comfortable live in a busy, city setting.

“Athena would become overly excited and treat human hands like toys during playtime. She was also fearful outside, did not get along with the foster’s cat and disliked having her harness and/or clothing put on her for a walk,” explains Corinne Fritzell, Behavioral Specialist at the ASPCA Adoption Center. “It’s important for her health to wear a sweater when it’s cold and a shirt when it’s warm and sunny to protect her skin.”

She also did not like her head, ears and feet being touched.

But these manageable issues were easily overshadowed by all of Athena’s positive qualities, especially the way she curled up in her foster caregiver’s lap for a snooze when she was tired. 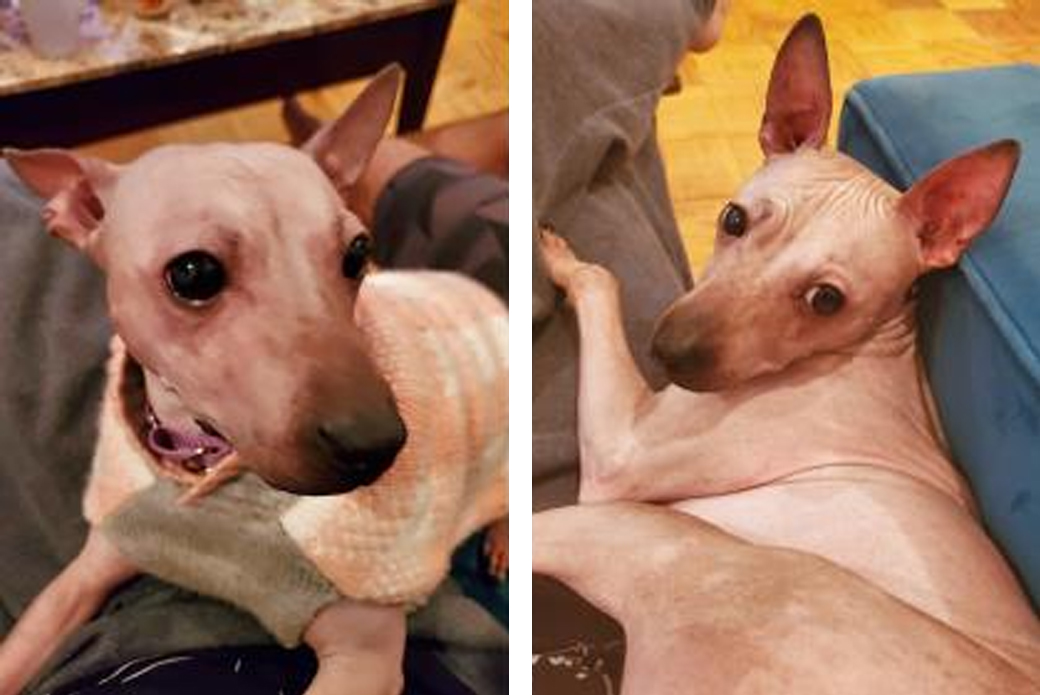 Through the hard work of both Athena’s foster caregivers and the Behavior team, Athena made significant progress in being comfortable with her harness, playing in appropriate ways and even beginning to walk outside.

Knowing that Athena had made great progress with her sensitivities, ASPCA Matchmakers had to be careful about finding an adopter who was willing continue the process and could best set Athena up for success in her new home.

“It was a thoughtful process with the ASPCA, I liked how committed they were to finding Athena the appropriate home,” says Kristina. “I had never adopted through them before, but it was truly a great experience.”

As luck—and plenty of screening—would have it, Athena’s third time with us brought a charming match! 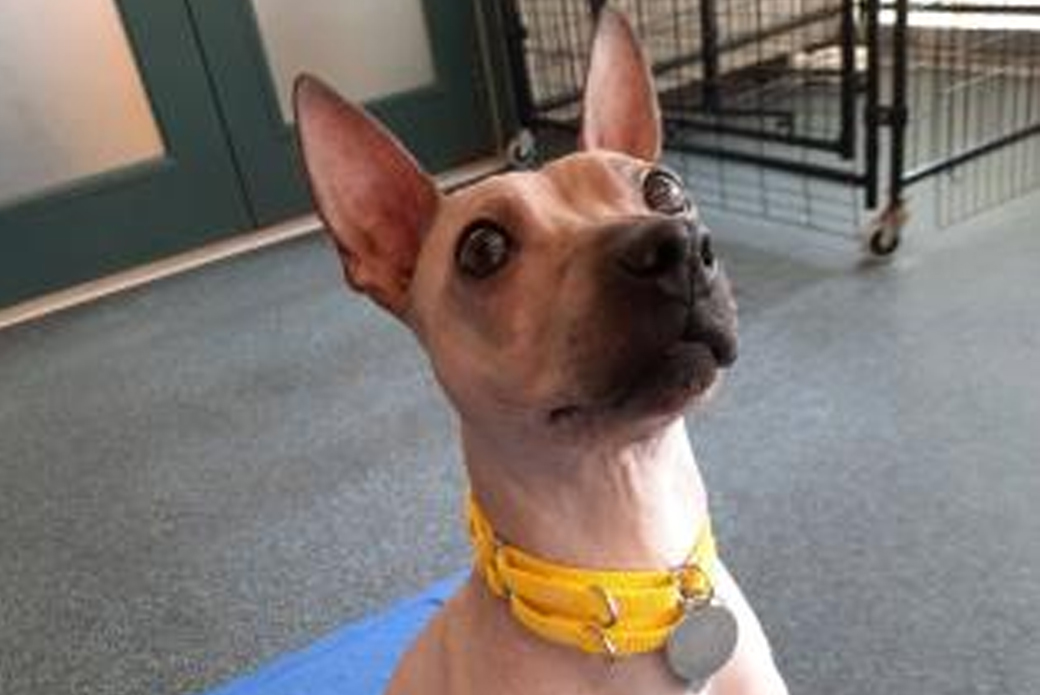 Since officially adopting Athena, Kristina and her family have seen how sweet of a dog she truly is. They’ve also been working on getting her comfortable in her new home. “She’s rarely left by herself. I think this has helped build a close bond,” Kristina tells us.

“When she wakes up, we have a morning routine of putting her sweater on and getting ready for the day. At first, she was very snippy about the morning routine, but she’s improved greatly. Half the time she just sits idly while getting dressed.”

Kristina adds that this routine has helped Athena get used to putting on her clothes and harness. 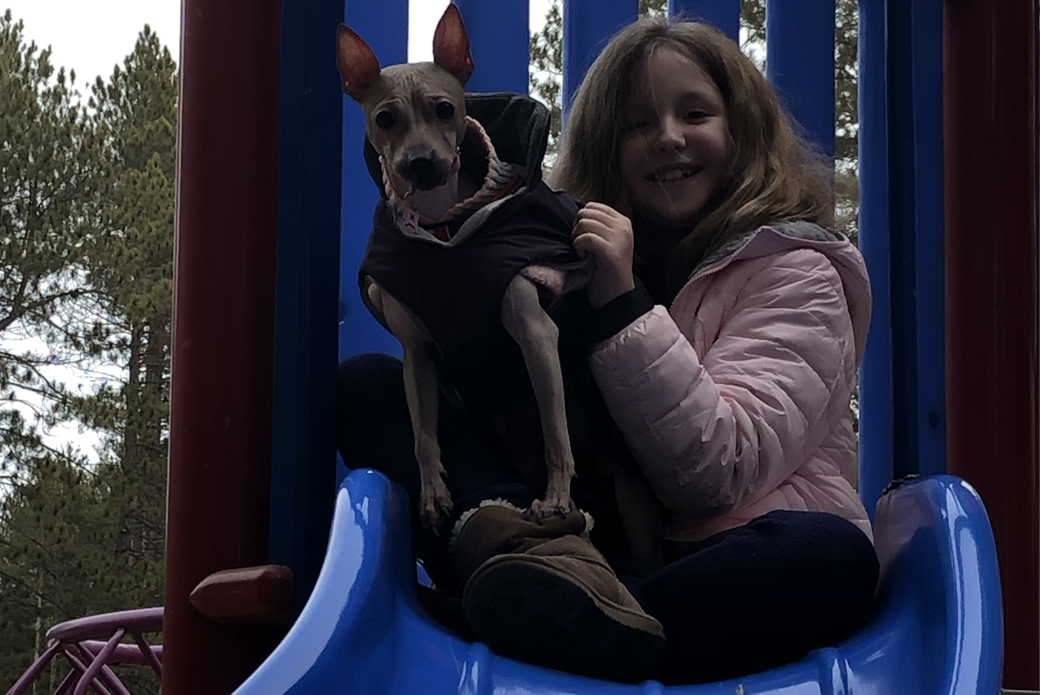 While the family has become vital to helping Athena grow and blossom into a beloved pet, Athena has become just as vital and important to them. “She has become most important to my daughter who suffers from anxiety and had a lot of trouble sleeping. My daughter now sleeps through the night with Athena,” says Kristina.

Adopting a shelter animal can come with its own set of challenges, but the payoff is always worth it when you see matches like Athena and her family. 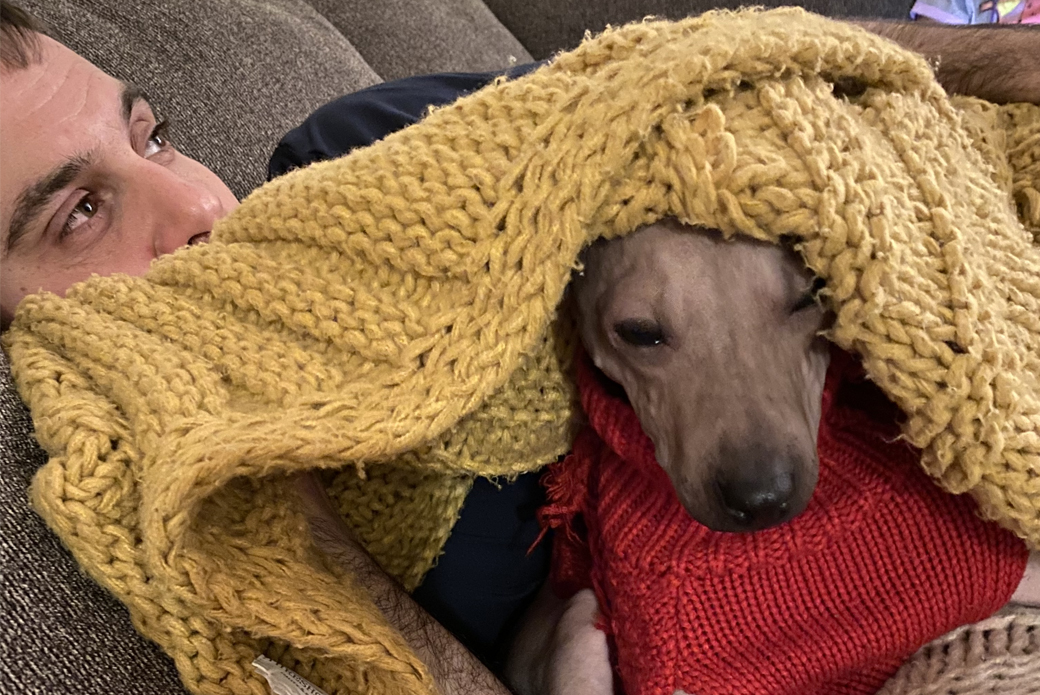 “I highly recommend a shelter dog,” Kristina explains, “They are sweet and loyal companions just looking for loving homes.”