Special Attention for a Sweet Dog with Special Needs

Vanessa B. had just rescued a young, mixed-breed dog named Ella when she learned about a dog available for adoption at the ASPCA.

Trixie was a three-year-old pit bull who had been abandoned by her previous owner.

“After hearing her story, I couldn’t say no,” says Vanessa, who adopted Trixie on June 13.

Trixie was found unattended and tied to a gate at Animal Care Centers of NYC in early January of 2022. Working in collaboration with the ASPCA, the NYPD transported her to the ASPCA Animal Recovery Center in Manhattan four days later.

“She was significantly underweight, dehydrated and had a dirty, foul-smelling haircoat,” says Dr. Jasmine Bruno, the forensic veterinarian who examined Trixie. “She had multiple skin wounds on her face, chin, neck, front legs, the top of her head and underside of her lower jaw. All were in various stages of healing.”

Trixie also had traumatic oral cavity wounds and injuries consistent with painful dog bite wounds. A medical examination also revealed that she was missing approximately 90% of her tongue, which may have resulted from an old traumatic injury, a previous surgical procedure or a deformity present at birth.

Trixie was admitted to the ASPCA Animal Hospital, where she received intravenous fluids, pain medication, antibiotics, antinausea medication and stomach protectant medication. Her nails were trimmed, her ears cleaned and she was bathed.

Because Trixie was underweight, she was fed according to a specific feeding regimen to prevent re-feeding-related illness.

“This illness can occur when an undernourished animal is overfed immediately following a prolonged period of inadequate nutrition,” says Dr. Bruno. “Their metabolism hasn’t had enough time to readjust.”

Trixie’s ability to ingest food and water without her tongue was closely monitored, and a tailored feeding protocol was soon established.

“When I first examined her, I realized she’s going to have a difficult time getting those treats down,” says Dr. Sarah Mantovani, Medical Supervisor, Canine Annex for Recovery and Enrichment (CARE). “The tongue in a dog serves a lot of purposes; obviously eating and drinking becomes much more challenging since the tongue is what’s used to get food to move to the back of the throat and swallow.”

Dr. Mantovani adjusted Trixie’s feeding and enrichment, substituting dry food with wet food formed into small meatballs, and replacing peanut butter with firmer treats. Food was placed in a bowl at the level of her head so she could take and swallow them easily. To drink, Trixie dunks her snout in a deep pail of water, so she can take in as much water as she wants.

“The tongue regulates temperature in a dog’s body,” says Dr. Mantovani. “It moves air over tongue which is what cools dogs when they pant.”

During warmer days over 75 degrees, Trixie’s outdoor walks were limited to 10 minutes, and she wore an ice vest with pockets for cooling packs to keep her body temperature within a normal range.

“We also had a body thermometer on hand to take her temperature to make sure the cooling vest did its job,” Dr. Mantovani says. “Overall, Trixie adjusted beautifully.”

Despite these challenges, Vanessa’s biggest worry was how Ella and Trixie would get along. But they quickly became best friends, which was no surprise to ASPCA staff.

“Trixie is a social and playful girl who loves everyone, including other dogs,” says Brittani Rae Hrehorovich, Behavior Specialist in ARC and CARE. “During her initial evaluation, she was friendly and tolerated all handling. She was a regular in off-leash playgroups and often used as a neutral helper dog to make other dogs feel more comfortable. Even though she doesn’t have a tongue... she still tried to lick us!”

At home, Trixie is the center of attention.

“Everybody loves her,” says Vanessa, whose three teenage daughters and husband Michael shower Trixie with attention. “She is as sweet as pie. You’d never know she had a painful history. And she follows me everywhere. I like to think she found me.”

To address Trixie’s particular needs, Vanessa makes small meatballs of wet food ahead of each meal and hand-feeds Trixie. She also keeps several deep bowls and buckets of water throughout her home, so Trixie always has access. Trixie’s favorite treat is peanut butter, whether slathered on a chew bone or baked into treats.

On walks to nearby parks, Vanessa keeps Trixie’s ice vest handy and brings cups of ice chips to keep her cool and hydrated.

“The ice chips are a treat,” says Vanessa. “They’re always on my shopping list.”

Vanessa takes Trixie and Ella out multiple times a day, sometimes before sunrise and in the evenings.

“Night walks are the greatest because it’s cooler, and she and Ella run around,” says Vanessa. “When she’s tired, she runs back toward me. She seems to know when she’s had enough.”

“I come home from work, grab the ice and we go for a walk,” says Vanessa. “Once you have that bond, it just becomes part of your routine.” 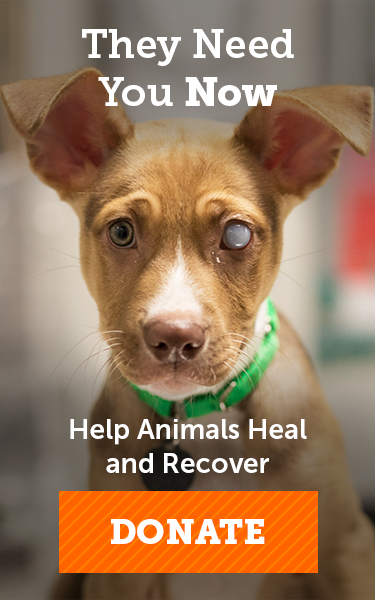