“Parkway” Parker is Rescued by One Police Officer, Adopted by Another

Just prior to Thanksgiving 2020, NYPD Officer Neftali Cruz began searching online for a cat to adopt. He and his 12-year-old daughter Allyson completed an application with the ASPCA and were soon contacted by a Matchmaker who set up a Zoom® video conference call.

“They showed us three cats, and after talking it over with my daughter, we chose Parker, a four-month-old tabby,” says Officer Cruz.

“He looked really nice,” says Allyson, who fell for Parker’s cuteness and gray and white markings.

Officer Cruz, a longtime lover of cats, has adopted felines twice before.

“The ASPCA made it very easy,” says Officer Cruz. “I had wanted a cat for a while, and now was the right time.”

From Parkway to Nursery

What Officer Cruz and his daughter didn’t know at first was that Parker was rescued by another NYPD officer. Officer Ofelia Mero, who lives in Queens, was off duty and driving her mother to work on October 15 when she spotted a kitten between exits 9 and 10 on the Grand Central Parkway, a 14-mile section of highway that runs from New York City to Nassau County,  Long Island. Officer Mero threw a sweater over Parker—shown here in her car—to catch him, and then drove him to the ASPCA.

“I saw something running across the highway,” says Officer Mero. “My mother thought it was a squirrel, but I said, ‘No, it’s a kitten!’”

Officer Mero checked her rearview mirror to make sure no one was behind her.
“Sometimes the Parkway is really busy, but that day it wasn’t,” she says. “I pulled over and grabbed a sweater from my car. The kitten had run to a grass median, and then toward a tree. I threw the sweater over him and grabbed him. He was panting and looked tired.”

Officer Mero, an animal lover herself, has four dogs and five cats of her own. On her days off, she volunteers with local rescue groups and always keeps her car stocked with pet supplies and crates in case she spots a stray. That day, she placed the kitten in a crate and after dropping off her mother, contacted Mo Khaled, a Caseworker for the ASPCA Community Engagement Team, whom she works with through the ASPCA and NYPD’s partnership.

“Office Mero told me she found an injured kitten on the Grand Central Parkway,” recalls Mo. He alerted the staff at the ASPCA Kitten Nursery, and Officer Mero brought the tiny charge in.

What’s in A Name?

“The funny part of this story is that Robert Dutchen, our Logistics Manager, named the kitten Parker,” says Dr. Allison Bliss, Veterinary Staff and Program Manager at the Nursery. “But Robert had no idea when he named him that Parker was found on Grand Central Parkway. That was a coincidence!”

Upon Parker’s arrival at the Nursery, staff noticed a scab wound at the tip of his tail where bone and ligament were exposed. 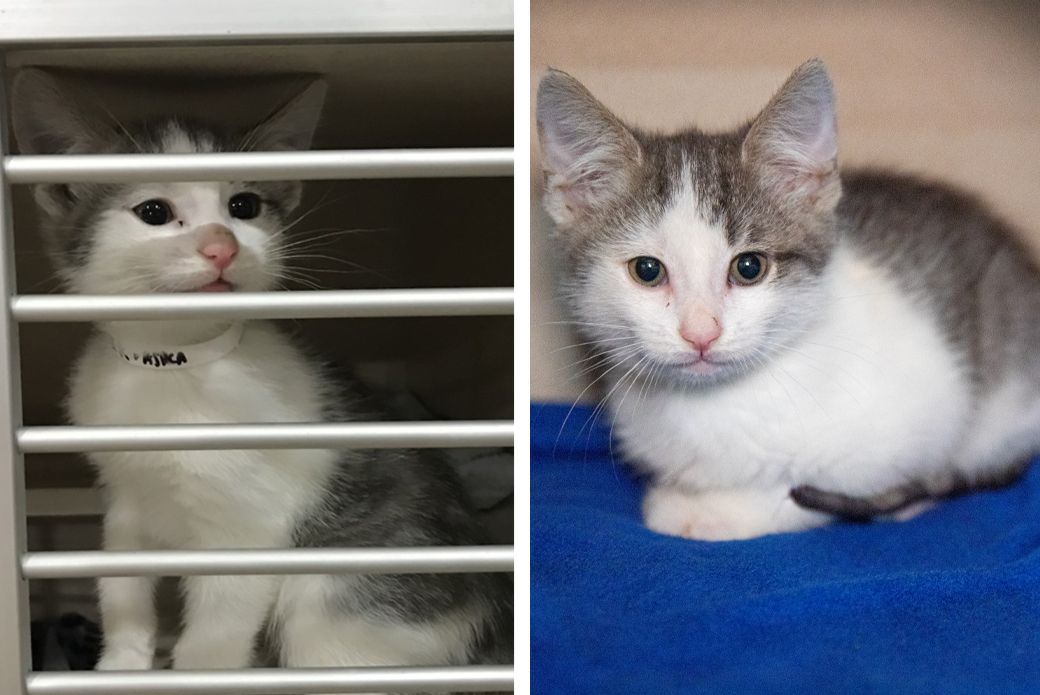 Left and right: Parker at the ASPCA Kitten Nursery.

“He was slightly nervous during his initial exam with Dr. Bliss, but the next day was playful and talkative,” says Gemma Smith, Administrative Manager of the Nursery.

Veterinarians at the ASPCA Animal Hospital removed Parker’s injured tail tip and neutered him the following day. He was also treated for diarrhea.

“He was a very well-behaved patient while he was in our Nursery,” says Tamara Bennett, a Neonate Specialist who shares her birthday with Parker’s estimated birth date—July 27. “His amputation didn’t seem to bother him at all, and he wiggled himself out of his e-collar every night before he went into foster care.”

Out of Traffic, Into A Home

Once in his new home with Officer Cruz’s family in Westchester County, New York, Parker hid, but not for long. Soon, his true kitten-ish behavior presented itself.

“He’s a goofy, silly cat,” says Officer Cruz. “He likes to play and has the zoomies—where he runs around. I love that. And he likes to sit in the chair that spins while it’s spinning.”

The second day in his new home, Parker caught a tiny, grey mouse.

“I was shocked,” says Officer Cruz, laughing. “But I haven’t seen any mice since!” At home and with Allyson, left.

Parker is also at home in the kitchen, where he will jump on the counter and watch as Officer Cruz cooks.

“He’s vocal when he wants his canned food,” says Officer Cruz. “He also likes to watch Allyson while she eats, either sitting on the table or in her lap.”

Officer Mero was overjoyed to hear he was adopted by an NYPD officer—another coincidence. 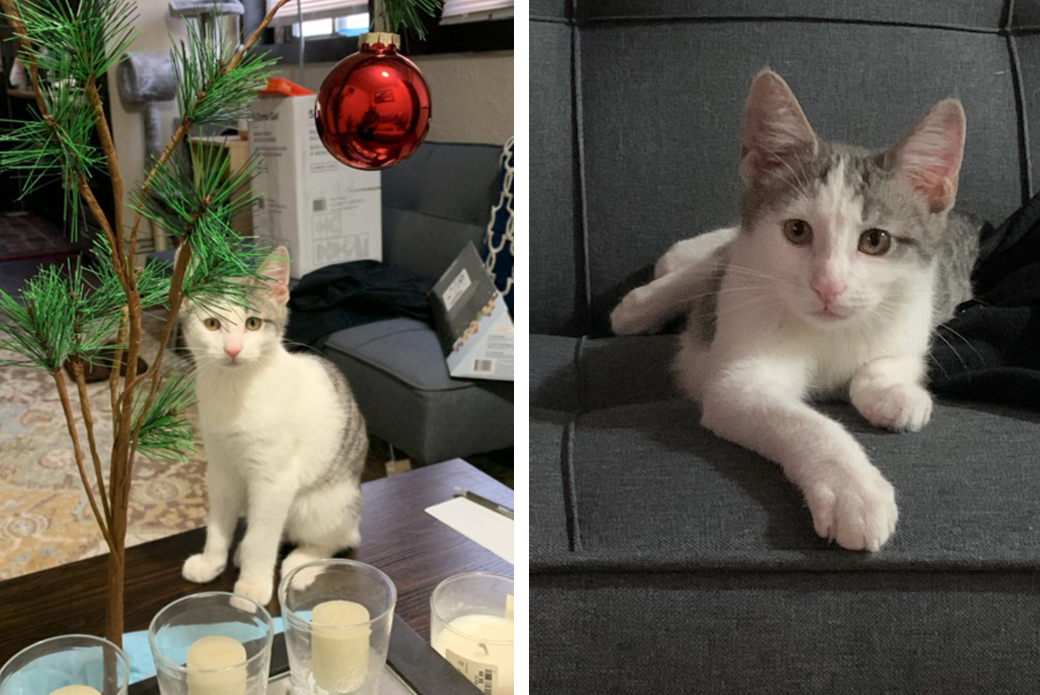 As a police officer, Officer Cruz is no stranger to rescues, but Parker’s adoption was a special moment for both his family and the kitten.

“It saves an animal, adoption does,” he says. “I would encourage everyone to do it.” 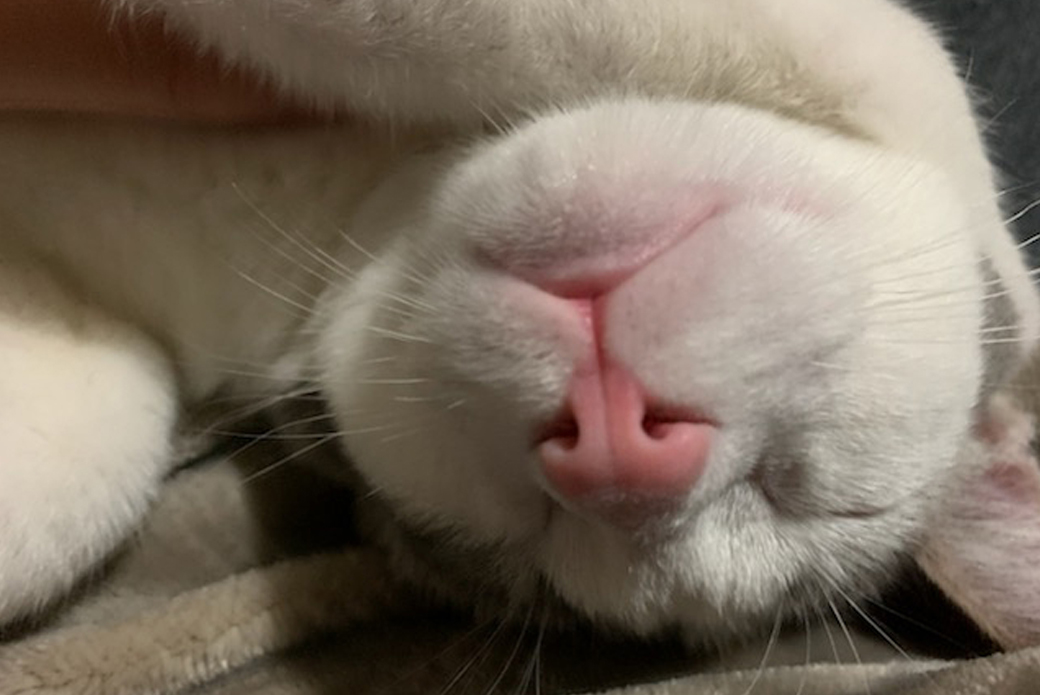