From New York City, With Love: Fajita’s Journey to Happiness

It’s often said that we don’t choose our pets, but that they choose us.

That’s certainly the case with Fajita, a two-and-a-half-year-old Bulldog-mix adopted by Jason and Tonya R. of Lewiston, Maine last August.

Jason and Tonya, their daughters Faith and Hope and Jason’s father Gary packed into their van one weekend to visit adoptable animals at a local Petco in Maine where the Greater Androscoggin Humane Society (GAHS) was hosting a fee-waived adoption event.

“We sat for an hour waiting our turn to meet a couple of dogs we had in mind,” explains Tonya. “Then we saw a shelter employee walking Fajita. We had been looking for the right dog for a while, and had even seen Fajita at the shelter.”

Eventually, they got a chance to play with Fajita, who jumped into the back of the family’s van, refusing to get out.

It was a happy ending for Fajita, who was rescued in July 2017 by NYPD officers who found her in the Bronx, tied to a fence with a garden hose. She suffered from a painful infection along the edges of her ears, which had been crudely chopped off, and her coat was filthy. Those officers brought Fajita to the ASPCA, where we took immediate action to help the ailing dog.

Fajita on the day she was admitted to the ASPCA’s Animal Recovery Center.

At the ASPCA, Dr. Julie DiMeglio, an Anti-Cruelty Veterinarian in the ASPCA’s Animal Recovery Center (ARC), oversaw Fajita’s recovery, which included a bath and treatment with antibiotics and pain medication for the infection.

Fajita’s ears were crudely cropped, leaving her with an infection.

Behaviorally, Fajita was happy to be around people, although Genevieve Popovitz, an Animal Care Technician on the ARC team, noted Fajita’s anxiety when she first arrived.

Fajita was also spayed before being transported to GAHS to give her an opportunity to find a home outside New York City.

Getting Comfortable in Maine

Zach Black, Director of Operations at GAHS, says that Fajita was adopted once but returned soon after because of her anxiety. “She needed a family that would be home with her more frequently,” he says.

Enter Tonya, Jason and their two girls. Tonya, who is a stay-at-home mom, and Jason understood Fajita’s anxiety and worked with her to overcome it.

“She was initially resistant to going for walks and wouldn’t come out of the driveway,” says Tonya. “Slowly, we gained her trust, a little bit at a time. Now she loves—even begs—to go on walks.” 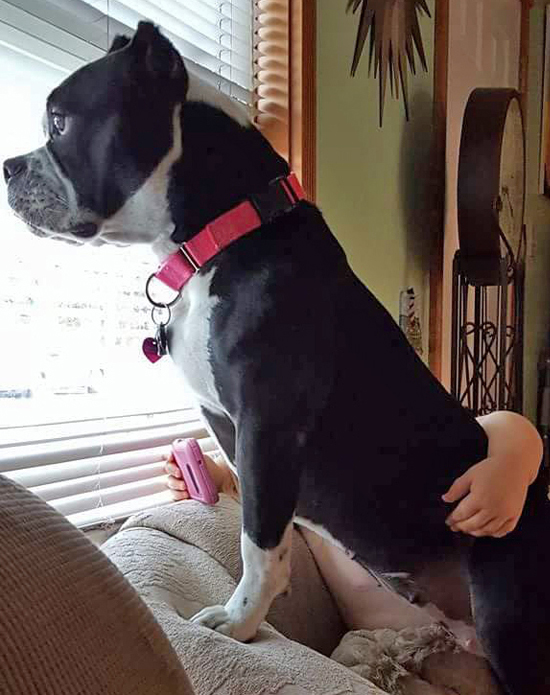 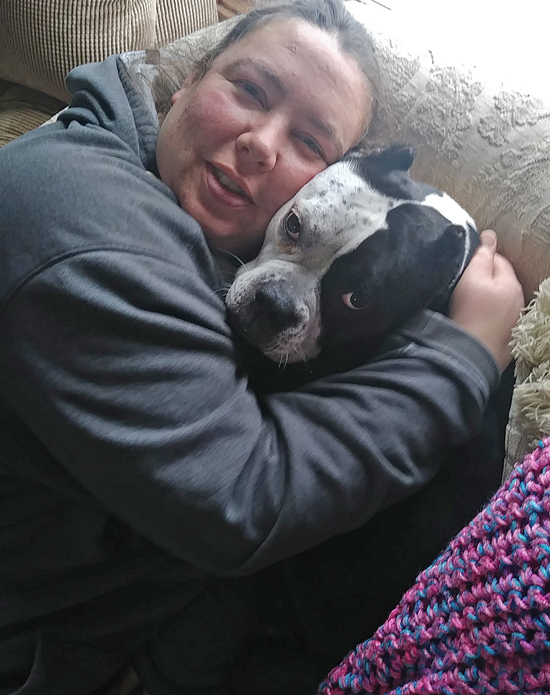 From left, Fajita and Hope look out the window; Tonya gives Fajita a hug.

One thing they avoid are telephone poles, which seem to make Fajita anxious. “She acted like I was going to leave her there,” Tonya explains about one incident. Fajita may associate the poles with being tied up and abandoned; we’ll never know for sure. Fajita’s case was eventually closed with no leads. But one thing is clear: Fajita is getting the chance to put her sad past behind her and experiencing the joy of a loving family.

The good-natured Fajita in one of her many costumes.

Now feeling comfortable at home, Fajita’s routine is very methodical; every night, she goes to bed promptly at 8 P.M. “She tucks herself in and pulls a sheet over her head,” says Tonya.

On Halloween, Fajita joined the family for trick-or-treating while dressed as a pumpkin. Once home, she disappeared as Hope and Faith sorted through their candy.

Tonya, Faith, Jason and Fajita get ready for trick-or-treating.

“We looked around and asked, ‘Where’s Fajita?’” recalls Tonya. “Well, she had already put herself to bed!”

Fajita in a familiar resting place: the family’s sofa.

Fajita has a bucketful of toys and will retrieve one on command. She can sit, shake and stay, and lets the girls bathe her and trim her nails. She also enjoys car rides, playing in the snow, games of fetch and running.

Fajita is especially close to the family’s youngest daughter, Faith. “She’s my best friend,” says Faith, who calls the pooch her “little princess.” 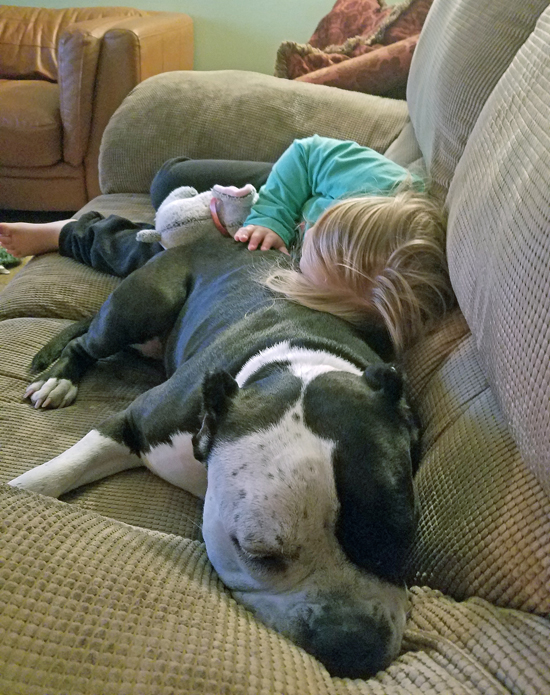 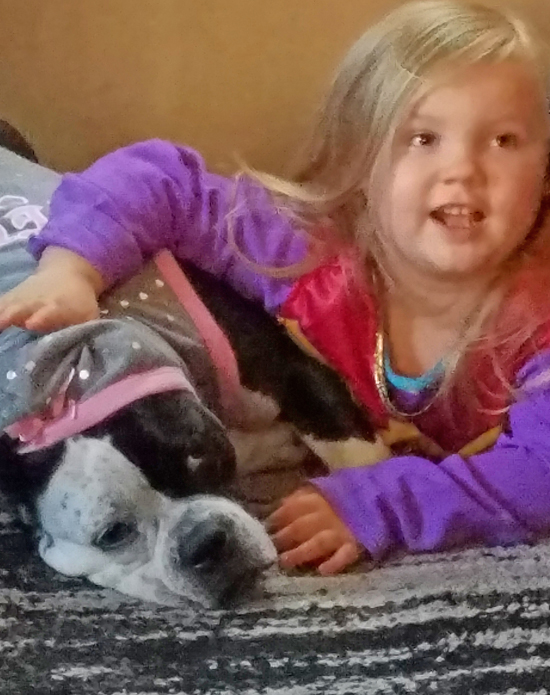 Faith, 4, and Fajita are best friends.

“We couldn’t have asked for a better dog,” Tonya says. “A dog completes a home; without Fajita our family wouldn’t be complete.”

GAHS’s Zach Black agrees. “Fajita’s adoption gave us all the warm ‘fuzzies’ that we like to feel with every adoption,” he says. “She was so deserving of this family—and that she found them makes it all the more special.”