It Takes Two: Together, Richard and Lizzie Learn How to Trust and Be Loved

In June 2017, two-year-old Richard and one-year-old Lizzie were brought into the ASPCA with several other cats after being rescued from an overcrowded home. After arriving at the ASPCA Adoption Center, the two frightened cats remained bonded to one another—each looking to the other for comfort and companionship.

As the pair settled into life at the Adoption Center, it was clear to veterinary and behavior staff that neither cat had been socialized when they were young, leading them to be apprehensive, nervous and frightened around humans. Though the young cats would need some time and patience, everyone had high hopes that the pair could learn to trust and open themselves up to becoming the loving pets they were always meant to be.

Lizzie at the ASPCA Adoption Center

After two months at the Adoption Center, Richard and Lizzie were finally given that opportunity when Carolyn O. decided to adopt them. Though it was her first time adopting from the ASPCA, Carolyn felt ready to bring some furry friends into her home, and she knew that rescuing a shelter animal was the only option for her. “It gets lonely for me living alone, and it’s in my nature to nurture,” Carolyn tells us. “I love my plants, but I see so many animals who need homes. I wanted to help cats who came from negative circumstances and give them all the love they deserve.”

So after spotting Richard and Lizzie on the ASPCA website, Carolyn decided to meet the adorable duo in person. Though behavior staff had been working diligently to help socialize Richard and Lizzie, the sensitive cats were still a bit hesitant when meeting new people. However, that didn’t deter Carolyn—if anything, it made her want to give them a chance.

Richard at the ASPCA Adoption Center.

“After meeting them and learning more about the circumstances from which they came, I was afraid they wouldn’t get adopted, or at least, not as quickly as others might,” she says. “I knew I could give them all the love and patience they would need. When I read the part of their bios about preferring a quiet home, I knew it was a perfect fit for the three of us.”

Carolyn made the adoption official, and the newly formed trio went home in August 2017. Once in their new home, Carolyn changed Richard’s name to Kintsugi and Lizzie’s to Cosette. Though the cats’ adjustment to their new surroundings took time, Carolyn tells us that they’ve settled into a comfortable daily routine, and that the duo has been making continued progress and coming out of their shells more every day. It’s a sign that they are slowly learning to trust, and leaving their past behind them.

“We are a little family; I can’t imagine my life without these precious babies,” she says. “After my alarm wakes me, Cosette comes to me to make sure their breakfast is at the top of my ‘to-do’ list. They take my place in bed after breakfast, so most of the time I won’t make the bed so as not to disturb them.” 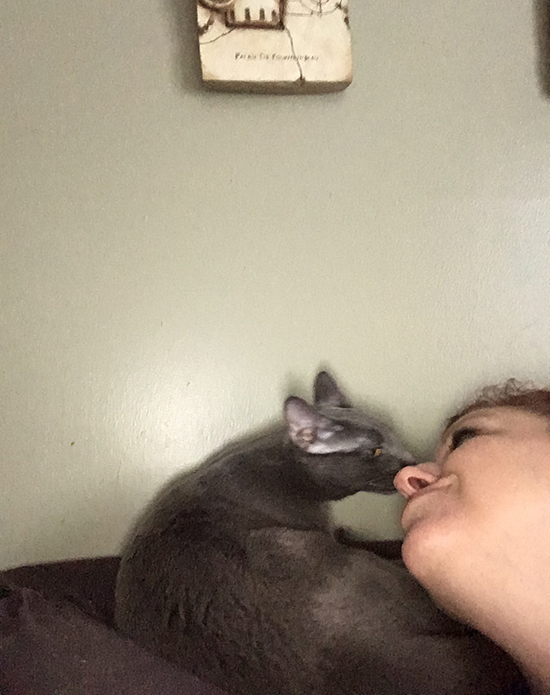 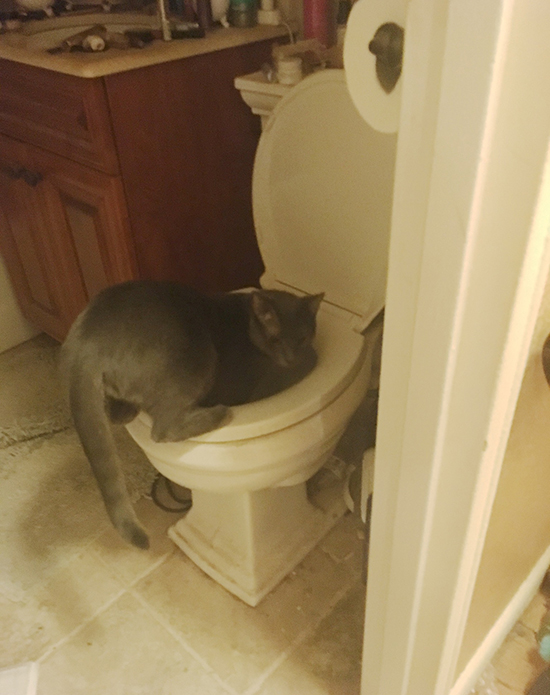 In their new home, Richard and Lizzie are opening up to love and affection from Carolyn, as well as learning to break some bad habits!

Though Kintsugi still doesn’t like to be touched, Carolyn tells us that he will keep her company by sitting on the arm of the sofa, or keeping watch outside on the window sill. “It’s gratifying playing with them and noticing the changes in their behavior every day,” she says.

It may sometimes seem like a daunting task to adopt an animal who has suffered, who may be traumatized or under socialized and who may not immediately return affection. These are the animals who wait in shelters every day, labeled by their beginnings. But cats like Cosette and Kintsugi are simply waiting for the right adopter to give them a chance, and to have the patience and love of someone like Carolyn. When asked what advice she might have for someone considering adoption, Carolyn had this to say: “Do it! I can’t believe I waited so long! Shelter cats have so much love to give, and it’s the best decision anyone could ever make.”

You can change the life of a shelter animal and create a Happy Tail just like Carolyn, Cosette and Kintsugi’s by adopting today! The ASPCA has many dogs and cats looking for loving homes. Not in the tri-state area? Find a shelter near you!