Hobi’s Happy Ending: How One Cat Found a Loving Home

In early November 2017, we met Courtney, a four-year-old cat who’d been brought to the ASPCA after being removed from a tragic situation with several other animals. Though ASPCA veterinarians deemed the sweet cat to be healthy overall, she spent a little bit of time getting her weight up and receiving basic veterinary care before she began her journey toward a loving home.

In her short time at the ASPCA Adoption Center, Courtney showed herself to be a calm and loving cat who adored affection from her favorite people, despite her sad beginnings. Everyone at the Adoption Center knew that it wouldn’t be long before someone special came along, looking to add the pretty cat to their family.

Sure enough, exactly one month after her arrival, a special adopter came to visit Courtney. Mohammed A. had recently decided to adopt a shelter cat after cat-sitting for a friend. During their time with their feline friend, Mohammed’s daughters decided that they wanted a cat of their very own—a request Mohammed couldn’t say no to.

When he brought his daughters to the Adoption Center, Mohammed knew that they needed to find the right fit for their family. After looking at some of the available adoptable cats, Courtney was the only one who didn’t shy away from Mohammed’s youngest daughter. The family took this as a sign that the cute black-and-white cat was in fact “the one” for them, and Mohammed made the adoption official on December 3, 2017.

Mohammed tells us that Courtney had a rocky (yet comical) start after her adoption, and that on the way home, she had an accident in her carrier and was a mess by the time they got to the house. So on her first day in her new home, Courtney, now renamed Hobi, had to get a bath—a cat’s least favorite activity! However, Mohammed adds that after her bath, Hobi was quite curious about her new surroundings and explored the entire house comfortably.

According to Mohammed, Hobi is now like one of the family. “She's adjusted very well now, and is spoiled by my daughters,” he says. “She's very affectionate and loves to sleep alongside my eldest.” 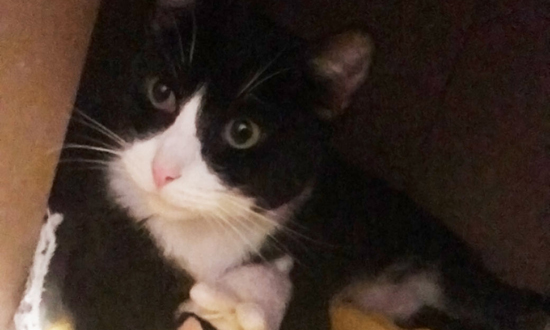 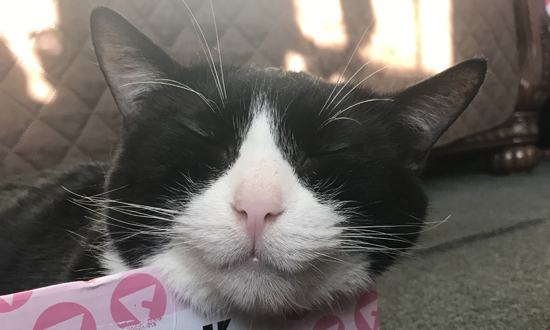 Living a life spoiled with love is just about the best outcome anyone could have wished for Hobi. Though her beginnings may have been rocky, the end of her story is what matters—and Hobi’s happy ending speaks for itself.