Cassie Gets a New Relationship Status

Jill N. has had many dogs in her lifetime, but never a pit bull until she adopted five-year-old Cassie from the ASPCA. Fortunately, her open mind paid off.

“She is the best dog I’ve ever had,” says Jill. “She’s just beyond my expectations.”

The two met—as many loving couples often do—on the internet. Jill’s daughter, Bianca, spotted Cassie on Bumble® during a limited promotional partnership between the ASPCA and the social networking platform. At the time, adoptable dogs in certain cities were featured on the app to help them as they searched for the right matches. Bianca pointed out the sweet dog to her mom as potential new addition to their family.

"Bumble is built on the values of kindness, respect and empowerment — both within our app and through donations to organizations that align with our mission," said Chelsea Cain Maclin, Bumble's Vice President of Marketing. "We're so proud to have partnered with the ASPCA to expand awareness of adoptable shelter dogs and help them find safe and loving homes. We're thrilled to hear that Cassie was able to find a home through our partnership with the ASPCA." 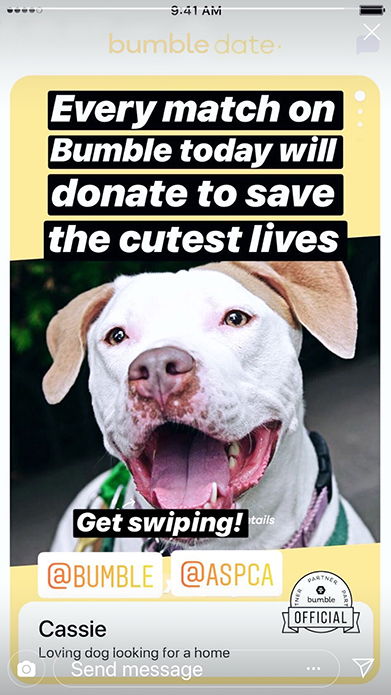 Two years before Cassie encountered Jill, she was rescued by the NYPD in Brooklyn with another dog named Turkey, a six-year-old Shih Tzu, who lived in the same household. Turkey had sustained head trauma after it was reported that she’d been thrown down a flight of stairs, so Cassie was also brought in for evaluation. Following their removal from the home, an arrest was made and the dogs’ owners eventually relinquished Cassie and Turkey to our care.

Cassie and Turkey then spent time at the ASPCA Animal Recovery Center (ARC), where Cassie was treated for giardia, a parasite that causes diarrhea. After some time in ARC, their next stop was the ASPCA Canine Annex for Rehabilitation and Enrichment (CARE) where both Cassie and Turkey were able to receive behavioral care and rest before they were able to be placed for adoption.

“Cassie was nervous and would bark and cower in her kennel when strangers approached,” recalls Jen Nastanski, Behavior Specialist at ARC and CARE. “But as she got to know the staff, she transformed into an affectionate, sweet and playful dog.”

Cassie quickly became comfortable walking outside and being pampered by her caretakers. “She loved cozy bedding, and the night staff would literally tuck her in with a blanket,” Jen says.

In April 2018, Cassie was placed with a foster caregiver to help her acclimate to life in a normal home. Cassie lived with two fosters—a short-term stay with ASPCA volunteer Monica T. and a longer stay with Trisa T. and Chas W. of Manhattan.

“In her foster homes, she really blossomed,” says Jen.

“She is well-behaved and smart, and knows ‘sit,’ ‘lie down’ and ‘wait’—even when it comes to food,” says Trisa, who cites peanut butter, string cheese, watermelon, strawberries, peas, carrots and rice as some of Cassie’s favorites.

Jill, who lives near Philadelphia, and her fiancé, Clinton, a Manhattan resident, made their first meet-and-greet with Cassie together at the ASPCA Adoption Center.

“After talking with her foster parents, I knew she was the dog for me,” Jill says. “I could see the love they had for her. And when they let her in the room with me, she slathered me with kisses.”

While Cassie may bark when she hears people at the door, that ends when she recognizes someone. “Once she knows it’s you, she’ll greet you with the cutest body wiggles and tail wags,” says Trisa.

Jill made Cassie’s adoption official on September 23, 2018, renaming her Sassy. (Turkey has also since been adopted by her foster family.)

An Ambassador for Pit Bulls

Ever since she adopted Sassy, Jill has committed herself to learning more about pit bulls.

“I didn’t know anything about them,” she explains. “I feel an obligation to educate others about the breed. If I can change one person’s mind, that’s a way for me to give back.”

Jill describes Sassy as playful and goofy, but not hyper.

“She’s more lazy than energetic; she’d much rather be in my bed,” says Jill. “She also loves couches and car rides.

A New Leash On Life

Jill credits the teams at the ASPCA for giving Sassy a new “leash” on life.

“I’m no dog whisperer,” she says. “The ASPCA and Sassy’s foster caregivers deserve a lot of credit. To take a dog like Sassy, who came from an abusive home, and transform her into what she is today…I’m the lucky one!”

Over the past year, Sassy has settled into Jill’s home and heart, and is loved dearly by the entire family, including her daughter Bianca and son Noah.

“I’ve never had an experience like this,” says the life-long dog lover. “Sassy is intelligent, sweet, has the biggest heart, and is friendly and adaptable. She’ll let anyone touch her and even likes small dogs.”

“I really lucked out,” Jill adds, though it sounds like they are both fortunate to have found one-another.