After Suffering from Horrific Trauma, Bandit Steals the Hearts of All He Meets

Animals often exhibit a resilience that can be hard for humans to comprehend. This is certainly true of Bandit, a middle-aged Pug whose recovery from horrific trauma is a testament to one creature’s capacity for endurance and courage.

Dr. Jennifer Good will never forget the September morning when she first saw Bandit in the intensive care unit at the Animal Medical Center (AMC) of NYC, a community partner veterinary hospital of the ASPCA.

“He was thin, his lower jaw was broken, and he had burns on all four paws and other parts of his body,” recalls Dr. Good, a former staff doctor for AMC’s Emergency and Critical Care unit. “He smelled like his skin was rotting.”

Bandit, after his transfer from AMC to the ASPCA. Warning: this picture contains graphic imagery. Please mouse over or click to view.

Despite his agonizing injuries, Bandit still enjoyed the company of people. “We couldn’t figure it out,” says Dr. Good, referring to the more than two dozen AMC staff members who were integral to his early care. “He was like our mascot. We were amazed at his spirit.”

After examining Bandit, Dr. Good notified the New York City Police Department (NYPD) and Dr. Robert Reisman, Supervisor of Forensic Sciences at the ASPCA, a department that partners with the NYPD on alleged animal cruelty cases. An investigation was launched, and police later concluded Bandit’s injuries were not caused intentionally—a silver lining for the small dog. 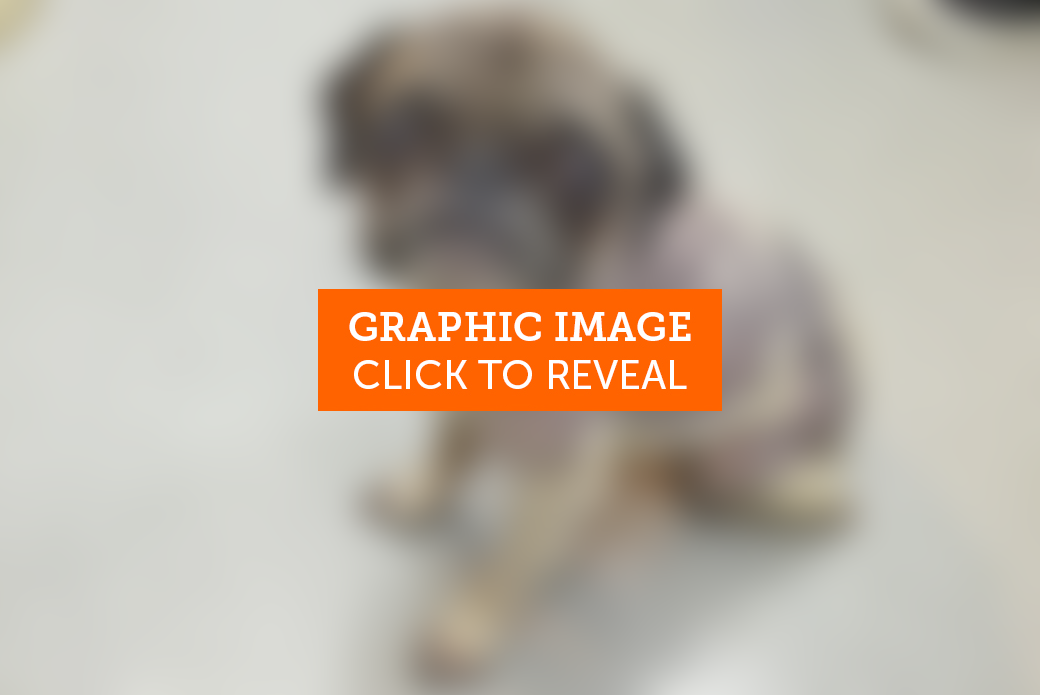 Bandit in mid-October, beginning to heal. Warning: this picture contains graphic imagery. Please mouse over or click to view.

Eight days later, Bandit was transferred to the ASPCA Animal Hospital (AAH), where Dr. Reisman noted that Bandit’s hunched posture and stilted gait were due to the burns on the undersides of his paws. For several weeks following, veterinary staff from AAH, the ASPCA Animal Recovery Center (ARC) and the Forensic Sciences team continued Bandit’s burn treatment with body wraps, cleansing baths and fastidious daily wound regimens.

“Burns are among the most painful of injuries,” says Dr. Reisman. “And Bandit’s were very bad.”

Yet, as before at AMC, the pop-eyed dog “enjoys being around people,” and “is very sweet,” according to daily medical records written by Dr. Christopher Greco, a veterinary intern. By mid-October, Dr. Lindsay Thorson, Medical Supervisor of ARC, reported light hair re-growth in some areas and no signs of infection under Bandit’s skin. Bandit’s broken jaw—believed to be the result of weakening bone due to severe periodontal disease—remained wired, though he was able to eat normally. Recovery would take time and perseverance.

Before Thanksgiving, Bandit went into a foster home with Dr. Good and her family. She, her husband David and their daughters Tess, 7, and Vida, 4, have two cats, Squeaky and Queenie, and a dog, Daffy, all of whom have histories of trauma. Bandit fit right in.

As fall moved into winter, Bandit’s hair grew back in patches, and scar tissue formed where other burns had dried. His jaw healed.

On March 29, six months to the day after Bandit was transferred to the ASPCA, Dr. Good and her family officially adopted him.

“I knew right from the beginning that Bandit had to be with me and my family,” she explains.  “I felt very bonded to him. He’s a special soul.”

Bandit loves his bed and being toted around in his favorite bag, which is lined in soft fleece. Although he remains “pretty sedentary,” Bandit likes walks, Dr. Good reports. The family has since moved to Athens, Georgia, where Dr. Good is now the Assistant Professor of Emergency and Critical Care at the University of Georgia’s College of Veterinary Medicine.

Bandit and Tess, happy together at Riverside Park in Manhattan.

Bandit has physical challenges common in Pugs and other brachycephalic (short-nosed) dogs: He wheezes, has abnormal airways, suffers from gastroesophageal reflux and regurgitates frequently. However, Dr. Good tells us, “He’s worth it.”

“I feel badly when I think about everything he’s gone through,” she adds. “But even in the midst of healing, he’s always been full of joy. My husband says, ‘All you have to do is look at his face and you smile.’”

As Bandit continues to charm all he meets, he becomes known less as the traumatized animal he once was, and more appreciated as the wonderful, resilient pet he now is.