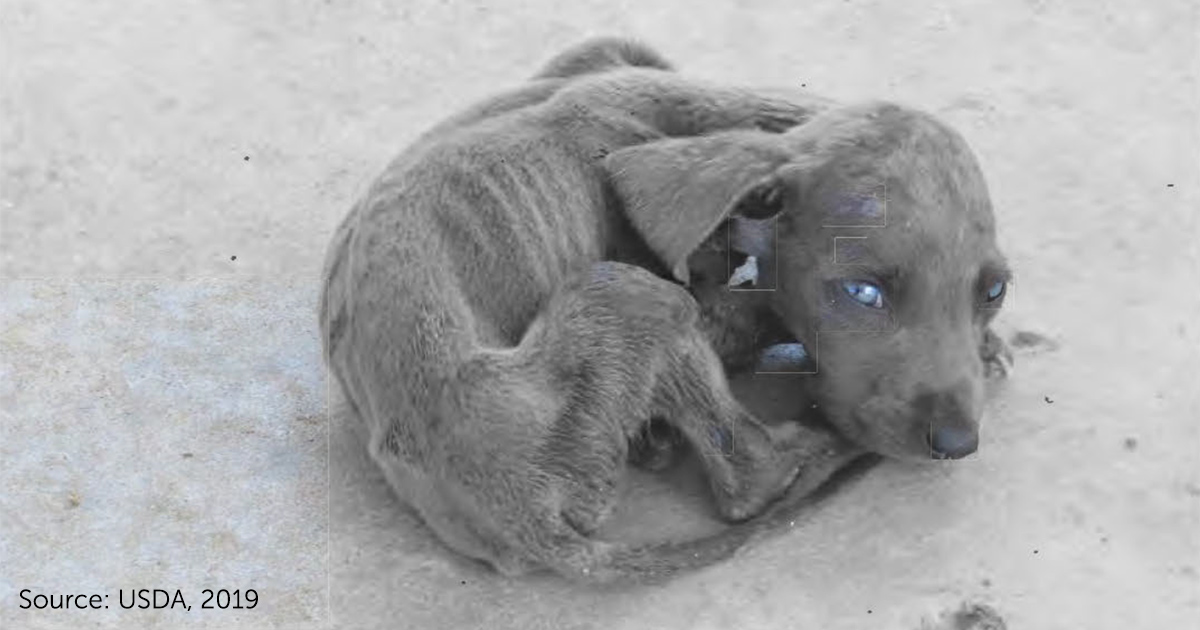 In July 2019, an inspector employed by the U.S. Department of Agriculture (USDA) described and photographed appalling conditions at a puppy mill in Missouri. There were approximately 150 dogs on the property, including a litter of five-week-old Weimaraner puppies who were living outdoors in 90-degree heat. These puppies were severely underweight, with protruding bones; one puppy was unable to stand. The puppies, along with several adult dogs, were infested with ticks.

The inspector didn’t happen to stumble upon an illegal operation. She was there to conduct a routine inspection of one of the 2,000+ commercial dog breeding businesses licensed by the USDA. She filled out her report—one of several she had written over the years—reviewed it with the breeder, uploaded it to USDA’s database and left.

The inspector’s collection of reports tells a gruesome story. In the winter of 2016, she had reported that this same licensed breeder was twisting off the tails of his puppies—a method of tail-docking that was not approved by the attending veterinarian. He kept dogs in a metal pen outdoors, with no bedding or drainage for waste or rainwater. There was a Shiba Inu who was unable to move or lift his front end. She reported further violations when she visited in summer—Mastiffs who had no room to lie down or turn around in their cages, and Australian Shepherds who had no shelter from the heat or rain. She would have seen in her file that the USDA renewed the breeder’s license in 2016 and 2017 despite these issues. 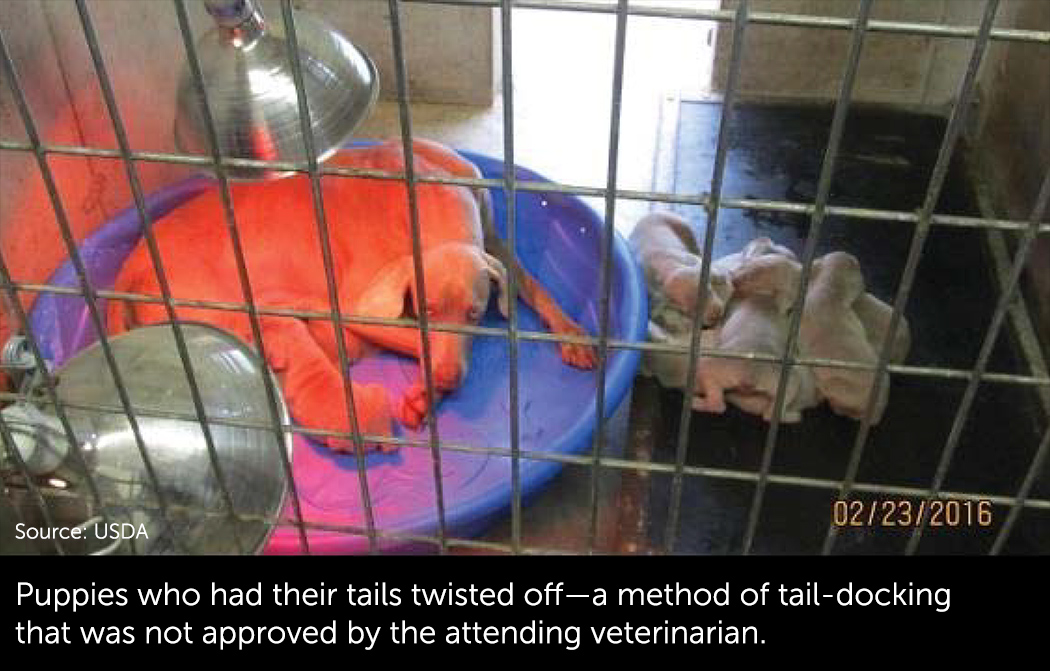 After finding the starving puppies in July 2019, the inspector was sent to the property three more times. Her subsequent reports clearly label violations as “repeat” because so many of them went uncorrected. This operation racked up 20 violations over five years. Yet a few months later, the USDA renewed the breeder’s license for another year.

Why does the USDA let animal cruelty go unpunished?

One of its key responsibilities is enforcement of the Animal Welfare Act (AWA). The agency licenses and inspects facilities to ensure compliance with the law, and when it identifies a violation during an inspection, it is authorized to take action against the violator by assessing a fine, suspending or revoking the license, or pursuing criminal penalties.

After a particularly scathing audit [PDF] in 2010, the USDA supposedly committed to strengthening transparency and enforcement, especially for the most problematic licensees. Yet its nosedive of animal welfare enforcement since 2017 reveals that the agency most often chooses to take no action at all, leaving violators to continue conducting business as usual.

The USDA boasts that 99% of AWA licensees and registrants were in substantial compliance [PDF]. However, given the agency’s business-friendly policies designed to minimize the documentation of violations, as well as federal efforts to shield the agency and its licensees from public oversight, that statistic is misleading and unverifiable. Even with such a coordinated effort to stack the deck in favor of puppy mills, we are able to expose the continuous, horrific treatment of dogs that the USDA lets go unpunished by combing through documentation buried in the agency’s public database and by submitting public records requests.

No dog should suffer like this. Please join the ASPCA Advocacy Brigade to be alerted when we need you to speak up for vulnerable animals in your state and across the country.