Every year, thousands of cruelly bred puppies are shipped into New York State through a pipeline of out-of-state breeders and brokers to be sold in pet stores. A tangible example of this is failed Iowa puppy-breeder Daniel Gingerich, who was licensed by the U.S. Department of Agriculture (USDA) and who supplied puppies to pet stores throughout New York for over a year. Gingerich was stopped in late 2021 only after amassing more than 190 violations of the Animal Welfare Act.

In fact, the USDA allowed Gingerich to operate for 17 months without ever inspecting his facilities. When they did finally get access, they found dead dogs, dogs with untreated injuries and illnesses like parvo and distemper, dogs with painful fur matting, dogs in cages that were too small, and moldy food.

Despite the stomach-churning findings, the USDA let Gingerich continue breeding and selling puppies to pet stores—including stores in New York City and Long Island—until an unprecedented complaint filed by the U.S. Department of Justice detailed the horrific conditions at multiple locations in Iowa where Gingerich kept dogs.

In November 2021, the ASPCA assisted in the rescue of over 500 dogs from Gingerich’s operation. The case was covered in detail by both national and local news outlets.

Unfortunately, the Gingerich case is not an isolated incident. Numerous federal audits over the past decade have revealed uncorrected, deep and systemic flaws in enforcement that have allowed bad breeders to remain in business even when the USDA is aware of violations.

Even if breeders are in full compliance with federal law, they are permitted to breed female dogs every single time they come into heat and keep them in stacked, wire-bottomed cages just six inches longer than the dog in each direction—often no bigger than a small dishwasher—until their bodies give out.

And because the sale of puppies in stores is still legal in the lucrative New York marketplace, puppy mills to continue to promote animal suffering and put consumers at risk.

The overwhelming majority of pet businesses in New York do not sell dogs, showing that stores do not need to sell dogs to thrive. Reputable pet stores sell food, offer services like grooming and boarding, or partner with local shelters and rescues to host adoption events to drive consumers to their stores. In other words, these stores make money without capitalizing on cruelty.

New York should no longer support a pipeline of out-of-state breeders who import cruelty into our state.

In June 2022, the New York State Legislature overwhelmingly passed NY A.4283/S.1130 to shut down the puppy mill pipeline and end the retail sale of dogs, cats and rabbits in pet stores.

We urge Governor Hochul to sign the Puppy Mill Pipeline Bill into law when it reaches her desk. If you live in New York, you can help by reaching out to the Governor here. 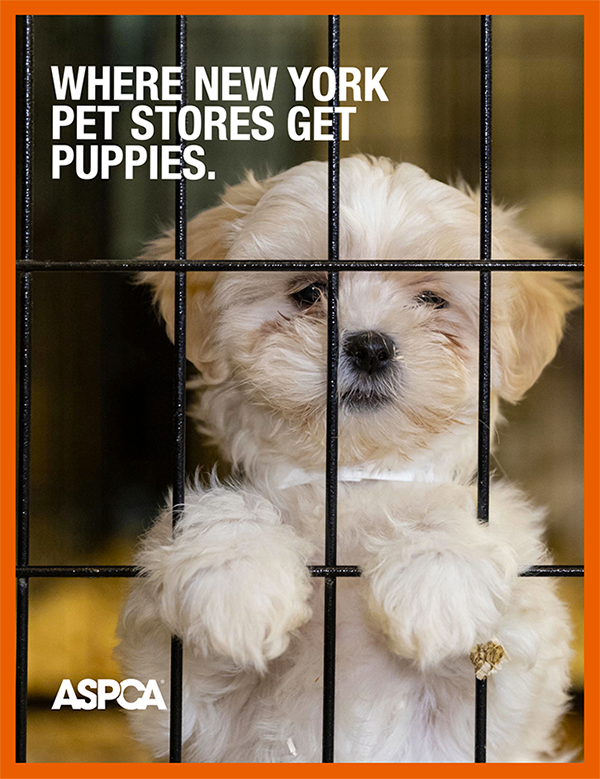 New York State is home to one of the highest concentrations of pet stores that sell puppies in the nation–and those puppies come from horrific and cruel commercial breeding facilities. Our report, Where New York Pet Stores Get Puppies [PDF], describes in detail where New York pet stores really get their puppies, and it provides evidence that the puppy mill business is deceptive and perpetuates cruelty.