Dogs Rescued from Arkansas Property Have Homes for the Holidays

This Thanksgiving, there are a special group of dogs who want to say thank you. They’ve had quite a year—but thanks to supporters like you—this will be their first Thanksgiving in new, loving homes.

In February 2020, the ASPCA helped rescue 29 dogs from a small property in Arkansas. Some showed signs of mange and other medical issues. Many were fearful. Almost all were housed in a small, fenced-in area outside, without adequate shelter to keep them safe and warm at night.

Realizing that she and her dogs needed help, the pet owner requested assistance from the ASPCA and local agencies to get the animals the proper care they needed. With the help of our supporters, we could be there for these dogs who needed a second chance.

But the rescue was only the beginning.

“Due to their lack of socialization and a relatively isolated life, many of the dogs needed help learning how to interact with unfamiliar people, walk on leash and accept handling,” explains Kristen Collins, Vice President of ASPCA Rehabilitation Services. “15 dogs reacted so fearfully that they required intensive behavior modification at our Behavioral Rehabilitation Center (BRC) in Weaverville, North Carolina.”

“Sassafras received a C behavior “grade,” due to fear, on her initial behavior evaluation,” recalls Lauren Zverina, ASPCA Shelter Behavior Science Director. “During the assessment, she displayed mild fear at first with glimpses of social behavior but became increasingly fearful to the point of extreme fear at times.”

Our team set to work, knowing that with our help, Sassafras, also known as Sassy, could gain trust in her human friends who would become her support system.

She made great strides in our care—developing bonds with people, learning how to walk on leash and even starting to enjoy petting. She also had a skin condition that required treatments and medicated baths.

Sassy proved to be a fast learner—graduating from the BRC in just over 4 weeks! When it came time to find a loving family, Sassy’s future pet parents were right around the corner.

“I saw her picture and I knew immediately that she was my dog,” Shanna P. explains. “I just knew in my gut that I had found the dog for me. It is a hard feeling to describe. I emailed about meeting her right away and constantly checked my email for a response.”

But the initial introduction was tense. Sassy avoided Shanna and her boyfriend, Bryce—unsure if she could trust them. This was expected for a dog who had been extremely fearful only a few months prior. There was hope that the budding relationship would work. Because Sassy had undergone an intensive behavior modification program with our experts and graduated from the BRC program, we felt confident that she was ready—that it would just take time, patience and lots of love.

Fast forward to today—Sassy is unrecognizable from the mange-covered, nervous dog she once was. She runs to greet her parents, jumping up and down and wagging her tail at lightning speed.

Shanna can’t envision her life without Sassy in it. They enjoy long walks outside, lounging on Shanna’s patio and even went swimming and boating together over the summer.

Shanna has a few words to share with future adopters. “Not only are you giving a dog a loving home, but I promise you, that same dog will make your life 10 times better than you could ever have thought!”

And Sassy’s not the only dog with a remarkable story to share.

“Shut down. Sat in corner looking away. Likelihood to play with, nudge, nuzzle or follow a familiar person? Not likely, almost no chance.” This is how Bear, a 57 lb. tan-and-white retriever mix was described in his initial evaluation. Like Sassy, Bear was rescued from the same case which also left him with trauma, but he was able to get the help he needed at the BRC.

After quarantining with her family in March, including her sister’s new puppy, Leighton returned home missing the companionship and unconditional love that animals bring to our lives.

She saw beautiful Bear on Petfinder® and thought he’d quickly be adopted by the long line of families eager to find furry friends in the middle of the pandemic. Leighton decided to email the BRC anyway.

To her great surprise, she received a phone call that Bear was still available for adoption. Our team explained to Leighton that Bear was surrendered alongside 28 other dogs from an overcrowded home.

“My heart absolutely broke when I heard this!” Leighton exclaims, “I had no idea how the smiling dog in the picture could be so happy!” Feeling even greater purpose to give Bear a new life, she made the two-and-a-half-hour trek to meet him the next day.

Shy Bear began warming up to his new friend Leighton with the help of cheese and hotdogs. Leighton felt a connection and knew they were meant to be together. As for the car ride home? Bear stuck his head out the window the whole way to his new digs. When he jumped on Leighton’s bed upon arrival, she knew he was officially home.

Today, Bear, who Leighton renamed Doug, is no longer spooked by new people or sounds. He loves hiking, camping, traveling, snuggling and eating ice cubes. He’s learned seven new tricks with the help of Leighton, and the two are always on an adventure together. She reports, “I can definitely say he is the dog for me! I love my sweet Doug and I think he feels the same way.”

Buck William, a dog so special he has two names, was the only dog rescued from Arkansas who tested heartworm positive. This meant his socialization and playtime with other pups would be limited, which posed a challenge in his rehabilitation.

As an ASPCA Professional Responder with animal behavior expertise, Becky S. met Buck shortly after his rescue—and Buck made an impression. “When I first met Buck, he was so frightened he had to be moved from his kennel to the adjacent exercise pen, a distance of about three feet, in a rolling crate. He couldn’t walk on a leash. He cringed at a hand approaching him. He was frightened of people.”

But soon, Becky and our team learned what Buck did enjoy—food and toys! We worked on building his confidence through positive reinforcement.

When COVID-19 hit, the ASPCA began to place some dogs in foster homes. Buck was in a special situation because his heartworm treatment meant he needed strict crate rest. Becky knew she could give Buck the specialized care he needed—both behavioral and medical.

“He was so terrified when he first arrived, I had to carry him in and out of my fenced-in yard, no rolling crates were available!” Becky tells us. “But within a day, with the help of my dogs Sadie and Merlin, he began to settle in and could walk from his room to the yard and back on leash.”

Continued behavioral treatment during a pandemic was not easy, but Becky and Buck were both up for the challenge. She introduced him to new people outside, or through the car window, and new experiences, including three trips to the veterinarian for his treatment.

Becky had a home lined up for Buck, but just as he was ready for adoption, tragedy struck. Becky’s dog Sadie suddenly died, and the unexpected loss was heartbreaking for the family. Buck and Merlin leaned on one another and grew even closer—Becky couldn’t bear to separate them.

Months later, the trio is doing incredibly well. Becky has played an integral role in Buck’s rehabilitation and adjustment to his new home—and her hard work shows. “Even though he started out fearful, he has turned out to be the easiest, low-maintenance dog I’ve ever had. Who would have guessed?” she marvels.

Buck William and his friend, Charlie.

Remarkably, one of Buck’s siblings from his previous living situation in Arkansas, Charlie, found a home in the same town. The two go on weekly walks together with their pet parents. Their past living situation is long forgotten, and their days ahead are brighter than ever.

2020 has been a tumultuous year for everyone.

While Sassy’s, Doug’s and Buck’s transformations are nothing short of amazing, they didn’t happen overnight. Each are brilliant examples of the ASPCA’s steadfast commitment to rehabilitating fearful dogs throughout our country—even during a pandemic.

This Thanksgiving is the first they’ll spend with comforts they’ve never enjoyed before. We couldn’t miss this opportunity to say thank you to our supporters—who make these heartwarming stories possible.

With your help, the ASPCA can ensure the road from rescue to rehabilitation to recovery can be as smooth as possible, and that in the face of unprecedented challenges, our work can continue. Thank you for making second chances possible for dogs like Sassy, Doug and Buck. 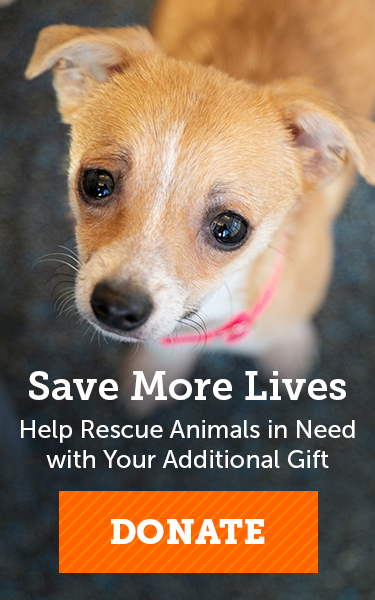