A Very Deserved Home for Delicata

Delicata, a three-year-old tortoise shell cat who’d spent time at the ASPCA, was no ordinary feline resident. When Katherine Good, Foster and Placement Manager for the ASPCA Community Engagement team, heard that Deli had finally found a home, it was a very big deal.

Delicata, otherwise known as Deli, had been recovered from a hoarding situation and on the ASPCA’s radar for over two years. After overcoming many challenges and with help from some surprising places, her day had finally come.

Delicata’s first visit to the ASPCA came in May 2018 after they received complaints about an overwhelming number of animals at a home in South Jamaica, Queens.

“There were bags of objects and garbage all over, in addition to cats that were unaltered and reproducing,” explains Isadora-Peraza Martinez, Community Cats Outreach Manager who led the case for the ASPCA Community Engagement team. “We noticed one of the cats had a severe neck wound and so, with the owner’s permission, we took her in.” 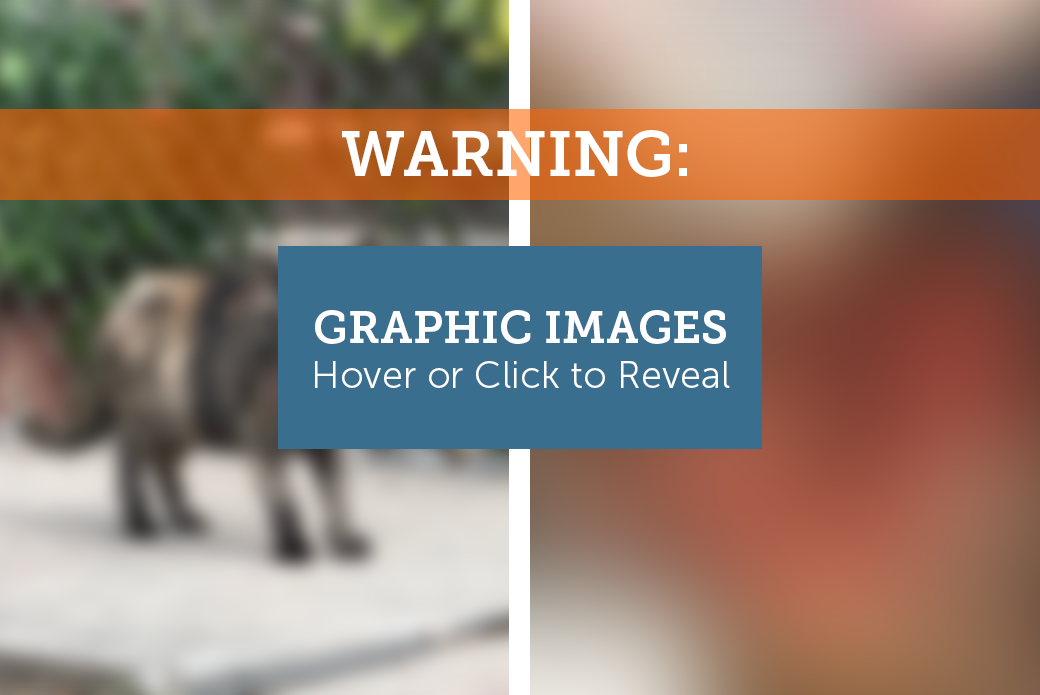 Delicata was treated and returned to the home while the ASPCA continued to follow up. Sixteen months later, New York City’s Adult Protective Services (APS) contacted the ASPCA for help with all of the animals at the address. At their request, the ASPCA took Delicata.

Unfortunately, now-pregnant Delicata’s neck wound had not healed and was again in need of urgent care.

Delicata underwent a skin biopsy and was diagnosed with ulcerative dermatitis, a rare condition in cats.

“We do not know the exact cause of feline ulcerative dermatitis, though it may result from an overstimulation of nerve endings,” says Dr. Danielle Armato, Medical Supervisor at the ASPCA Animal Recovery Center (ARC). “Cats with this condition often have large ulcerated lesions on their necks or between their shoulders, which they will repeatedly self- traumatize. Delicata’s case was further complicated by a flea infestation and a possible food hypersensitivity.”

Delicata gave birth to a kitten named Butternut, whom she raised in ARC despite being medically compromised. Once Butternut was weaned, he was later adopted by Ashley Perry, a foster volunteer for the ASPCA’s Kitten Nursery. Meanwhile, Dr. Armato tried multiple therapies to treat Deli’s wound, including contacting an outside dermatologist for recommendations and putting her on a strict diet.

In March, Dr. Armato took Deli home to foster her during the COVID-19 pandemic, working through several medications and dosages to find one that worked best. She was on six medications before starting Apoquel, a drug commonly prescribed for dogs with skin allergies. While there is not much information available about the use of this drug in cats, the inflammation around Deli’s neck diminished. 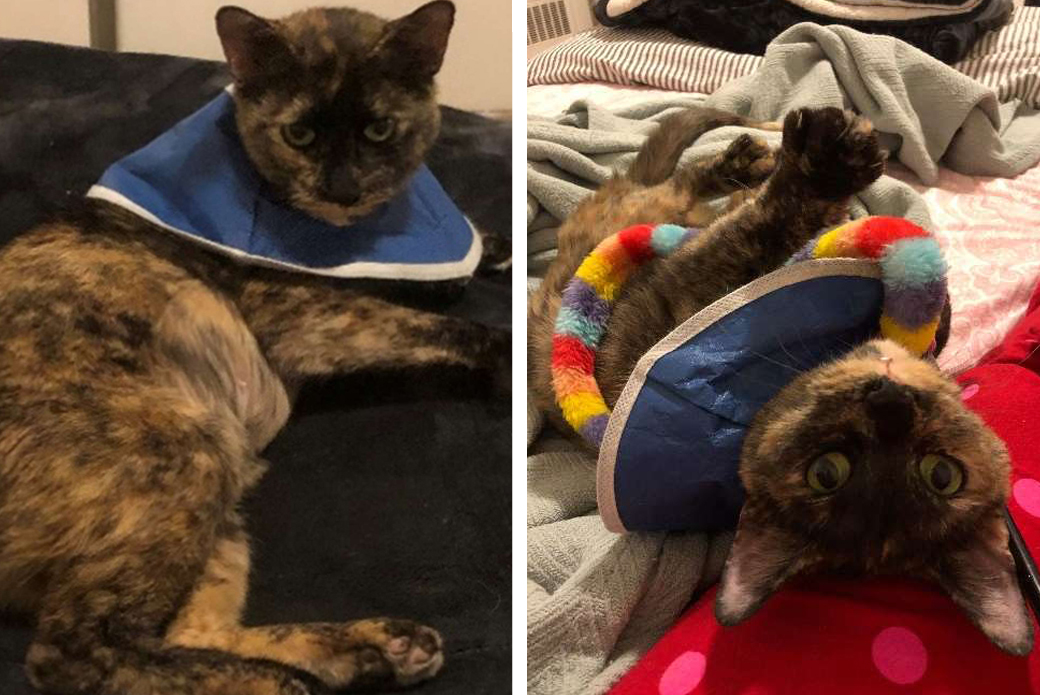 “Delicata’s transformation was remarkable after starting Apoquel,” says Dr. Armato. “She no longer traumatized the skin around her neck and her e-collar could finally be removed. And her quality of life improved.” 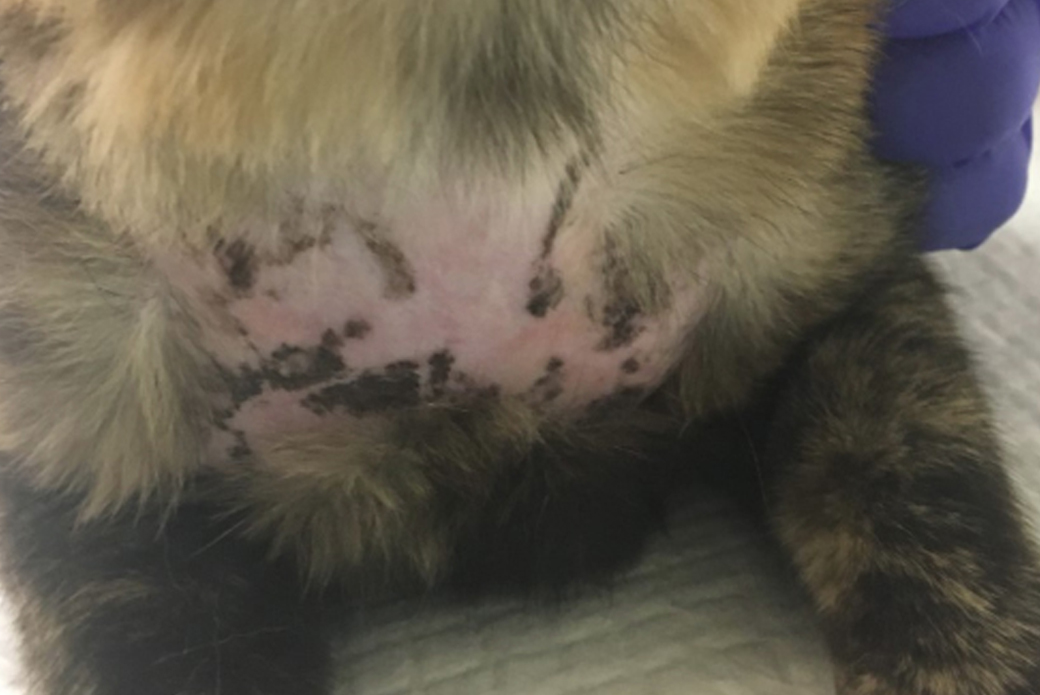 “She was always happy to see us,” Samantha says. “She’d crawl onto our laps and solicit tons of petting. That warmed my heart.”

A Donor Steps Up for Deli

Mohawk Hudson Humane Society (MHHS), an ASPCA placement partner, agreed to help and put her up for adoption. On July 3, Brian Fitzpatrick, the ASPCA’s Coordinator of Placement and Transport, made the three-hour drive to deliver Deli, who was one of two dozen cats and dogs MHHS has re-homed for the ASPCA over the past five years.

But Deli came with special needs.

“We needed an adopter who understood the fragility and importance of the specific and consistent care she needed and would willingly take that on,” says K.C. Campbell, Animal Logistics Manager. 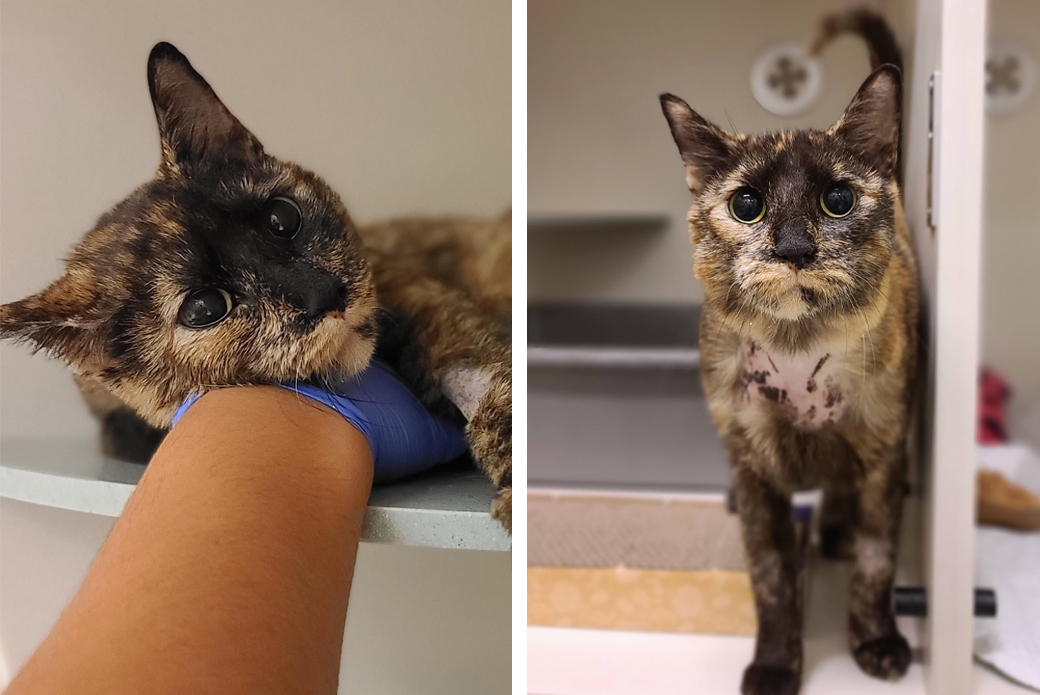 “We were just heartbroken when Taylor and Chloe died,” says Carolyn. “We wanted to do something special to honor their memories, so their deaths would have meaning.”

The couple sent a check earmarked for the specific food Deli would need for the rest of her life.

“She let me pill her daily with no fuss and purred the whole time,” says Ian Moch, a Veterinary Technician. “We really bonded after that.”

A Soft Spot for Special Needs

For Ashley Putz, a professional photographer with two young children, adopting a pet meant finding one with a unique story.

“I had my heart set on a cat with special needs or one who had been passed over,” says Ashley, who found Deli online in late September. “I’ve always had a soft spot for things that are imperfect, and I knew right away I wanted her.”

Ashley made an appointment to meet Deli and adopted her on September 24. She soon learned that Deli likes to be pet with two hands at once, something that her daughters, Greta, 10, and Lulu, 5, enjoy doing. “They give her a lot of petting and brushing,” says Ashley. “And Deli leaves toy mice on their beds. She brings us all so much enjoyment.” 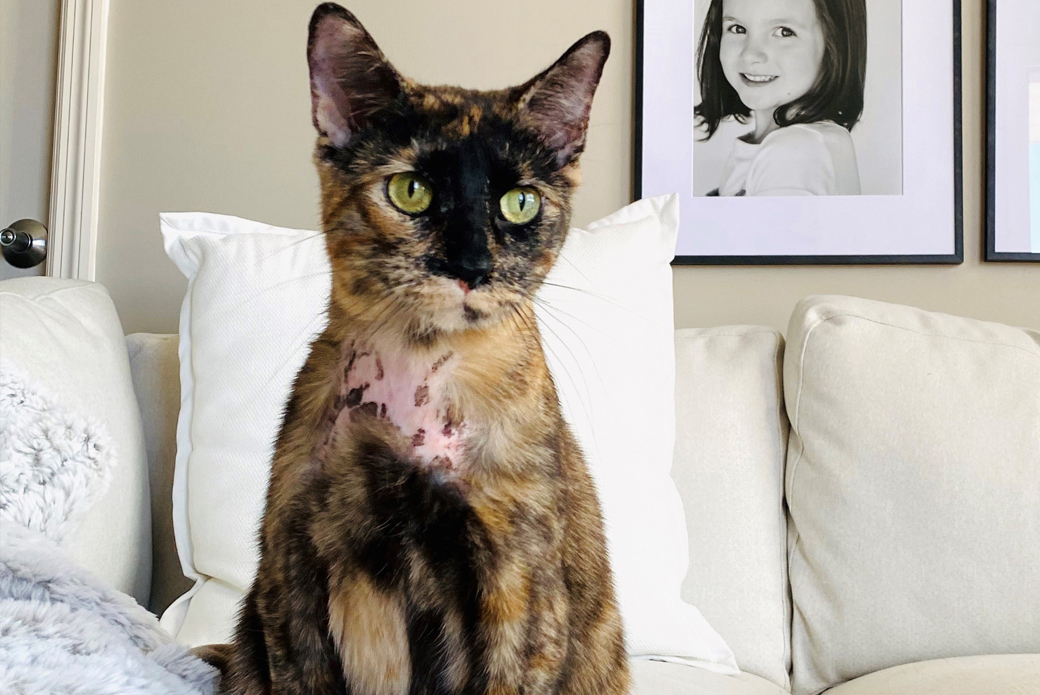 Ashley was inspired by the generous donation from Carolyn and Brian to fund Deli’s lifelong food supply.

“I’m very thankful,” she says. “Something that’s cost prohibitive doesn’t help a pet’s chances for adoption. Deli’s novel protein diet was a big factor in getting her skin condition under control, and I’m obviously continuing that. She is the picture of health.” 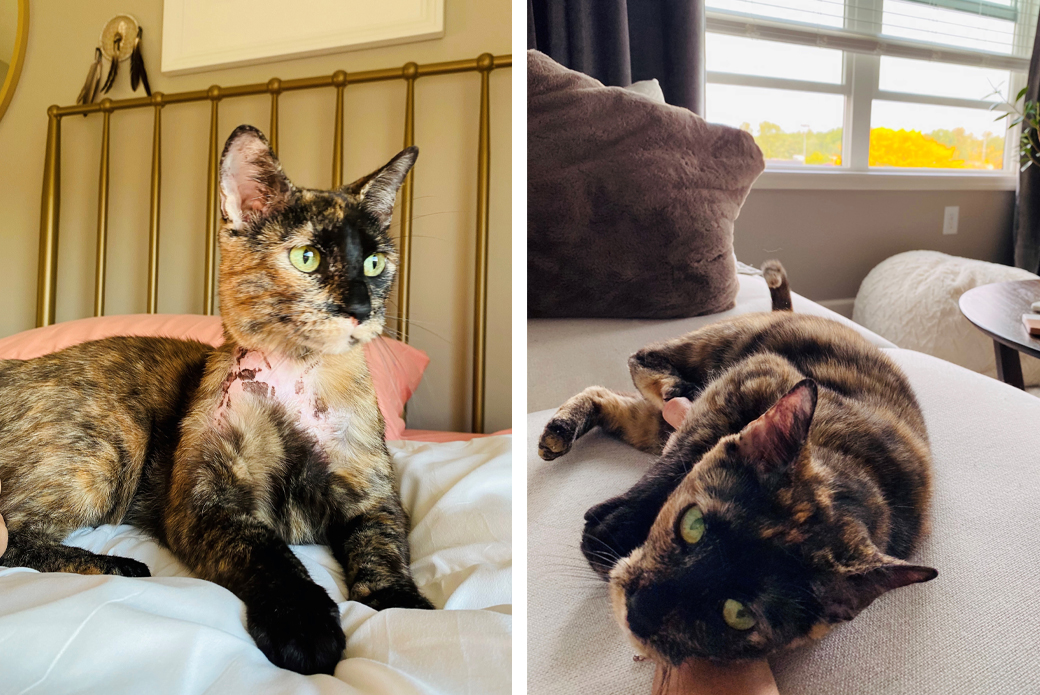 Ashley credits the ASPCA and MHHS for Deli’s progress.

“I could tell both organizations took a lot of time to figure out how to manage her case,” she says. “Any other place may not have given her that chance. It’s gratifying she’s come such a long way. 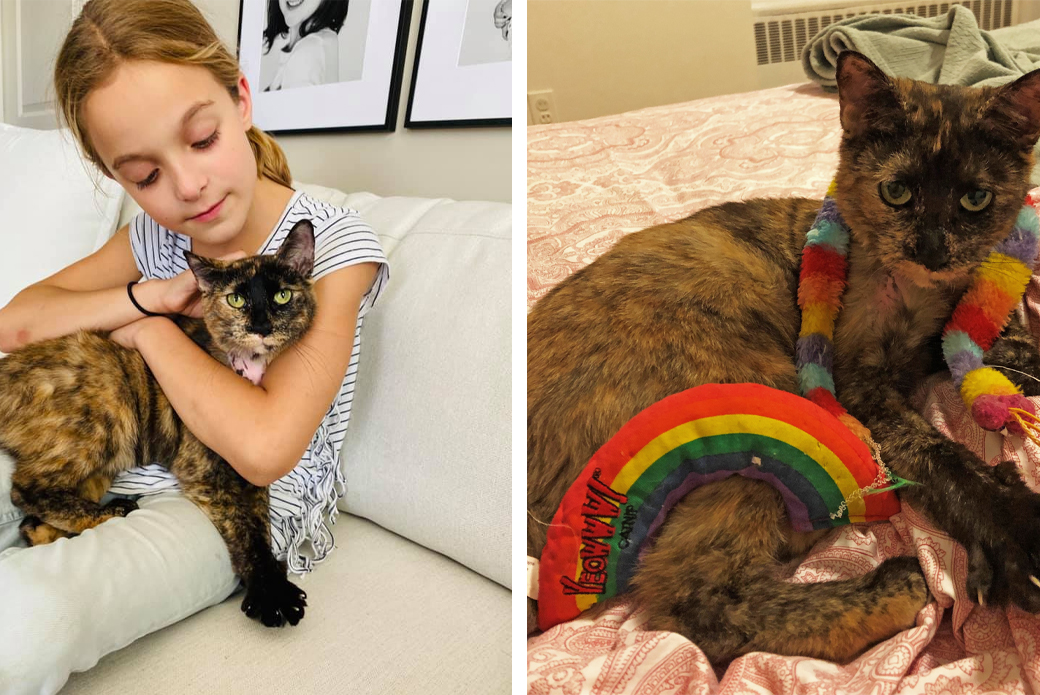 “Other than her bald patch you’d never know that she has an issue,” she adds. “Deli is a low-key, happy lap cat. And she’s beautiful.”

With help from a community of compassionate people, Deli finally got the home—and life—she deserves.