Hailie walks and plays with the animals, and offers them toys. Then, she unpacks her camera and begins snapping photos.

Hailie first visited the Chautauqua County Humane Society after one of her two pet rabbits died of natural causes.

It didn’t take long to find available bunnies. On September 7, the Humane Society received a transport of 10 rabbits rescued by the ASPCA. The rabbits were among more than 1,000 animals rescued from a 70-acre farm in Westport, Massachusetts. It was the largest farm animal cruelty case on record in the Northeast.

Hailie and her grandmother, Susan Hanson, fostered three baby bunnies with the intention of possibly keeping one, but ultimately decided they couldn’t split them up. “We ended up adopting all three,” says Susan.

Hailie with her newly adopted bunnies and dog, Abbie.

“They were friendly and nice, and I fell in love with them,” adds Hailie. “And they needed a home.”

At the Humane Society, Hailie started first as a volunteer cat socializer while Susan walked dogs. Soon after, she started taking pictures of the animals available for adoption.

One of Hailie’s newly adopted bunnies

“I’m awestruck by her photos,” says Sue Bobek, Director of Animal Services at the Chautauqua Humane Society. Sue says the Society has placed nearly 1,300 dogs, cats, rabbits and pocket pets in new homes in 2016, and has up to 100 animals available for adoption at any given time.

“I like taking the photos because when people see them, I hope they’ll fall in love and want to adopt,” says Hailie, a sixth grader who counts art among her favorite subjects. Last summer, she taught herself how to use her grandmother’s camera, capturing photos of her own pets and of nature. “You can bring out their personalities in a photo— especially if they’re playful,” she says. 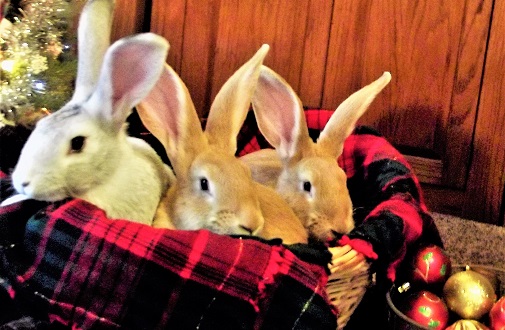 Sue credits Hailie’s photos with attracting people to the shelter and encouraging adoptions. “People come in wanting to see a specific pet whose photo is on our website,” Sue explains. “And many of those photos are Hailie’s.”

Without volunteers like Hailie, “many of our animals would sit for a while without their photos on our website,” explains Sue, whose career in animal welfare began 15 years ago after she herself started as a volunteer.

“When a young person like Hailie says, ‘I want to help’, it’s amazing,” says Sue. “She reawakens our passion for animals. We need to think about our future, and this is exactly the type of person whom we want to take the reins.”

“It’s very rewarding to know that the animals we rescue, like these bunnies, are in good homes,” adds Kyle Held, the ASPCA’s Regional Director of Field Investigation and Response. “To see someone like Hailie elevate that kindness and passion to help other homeless pets reinforces our commitment to fighting animal cruelty.”

Only one of the 10 ASPCA rescued bunnies—Aster—still awaits adoption. But all of the bunnies who spent time here are immortalized by Hailie in framed portraits on the walls of the Chautauqua Humane Society’s lobby, a constant reminder of how just one young person, motivated by a cause and armed with a camera, can truly make a difference.