Once Confined to a Basement; Now Living Their Best Lives 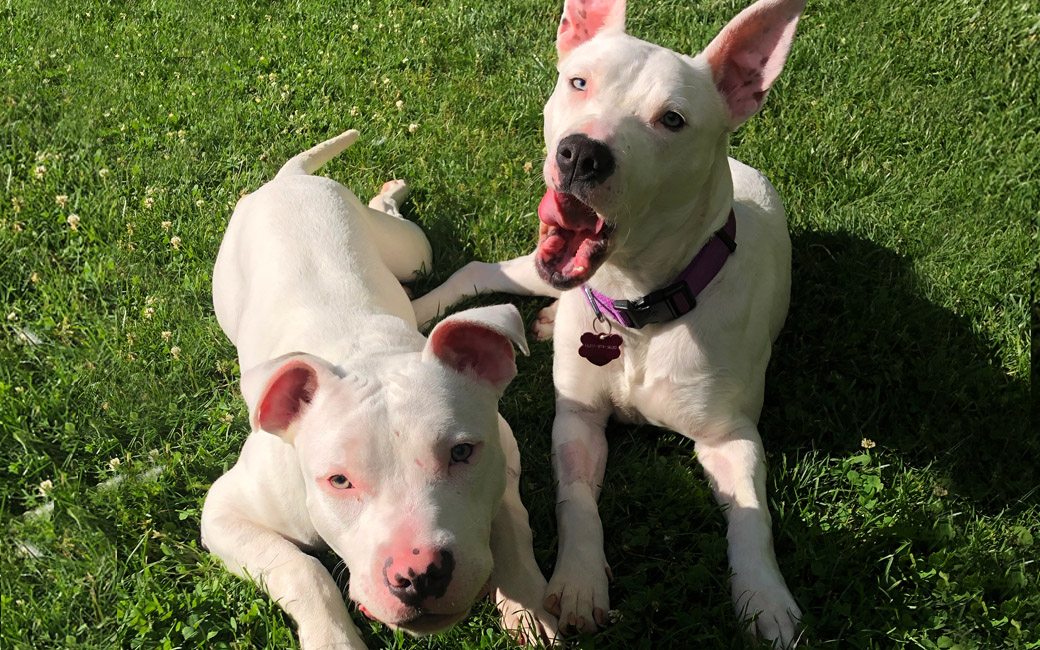 In mid-April, as New York City was just three weeks into its COVID-19 shutdown, Officer Chris Tansey of NYPD’s 48th Precinct followed up on a report that several pit bulls had been abandoned in the basement of a building in the Bronx. There, they found several dogs in unsanitary conditions.

“They appeared dirty and underweight and had no clean food or water,” says Paul Mayr, Law Enforcement Liaison for the ASPCA. “There was poor ventilation and they were surrounded by feces and urine.”

Top: Erie, left, and Michigan in their new home. Above, Huron upon intake.

On April 24, the dogs were surrendered by their owner and transported to the ASPCA Animal Recovery Center (ARC) in Manhattan for medical exams and care. 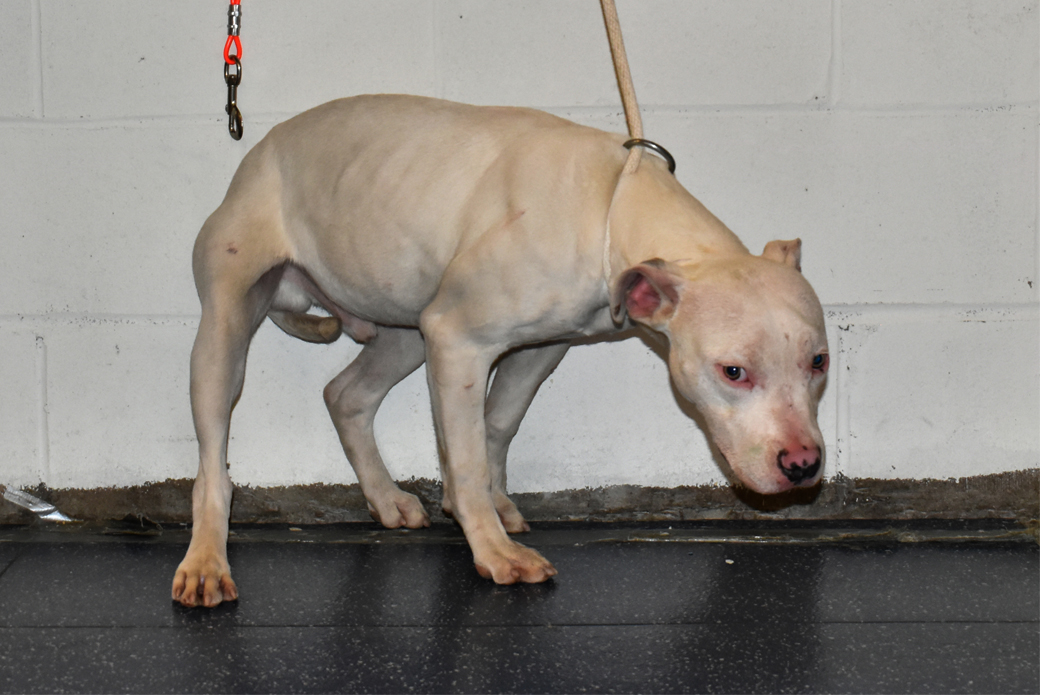 Above: Erie upon intake.

“All of them were dehydrated, with urine and fecal staining, one had dried blood on her coat,” explains Kris Lindsay, Senior Director, ARC and CARE (Canine Annex for Recovery and Enrichment). “They also had ear infections and diarrhea.”

The dogs, similar in appearance, were named after the Great Lakes—Erie, Michigan and Huron—but as they made their way through treatment, their stories became more and more distinct. 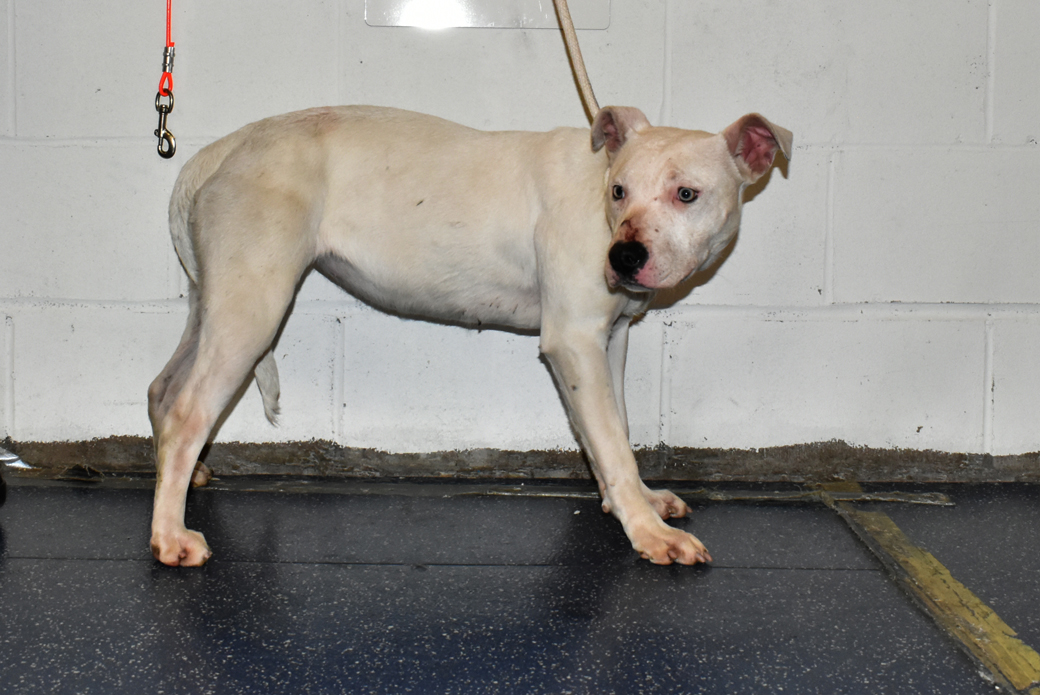 Michigan upon intake. She also had a scab wound on the bridge of her nose (below).

Dr. Jasmine Bruno, a Forensic Veterinarian, examined the dogs upon their arrival at the ASPCA.

“Erie had a fever and was limping,” says Dr. Bruno, who, along with Dr. Melissa Toulouse, started emergency fluid therapy for shock and prescribed pain medication for a suspected soft tissue injury. Radiographs revealed a decrease in muscle tissue on Erie’s left hind leg.

Though mildly fearful, Erie also showed some comfort with people, according to Christina Lee, Director of Behavior for ARC and CARE. 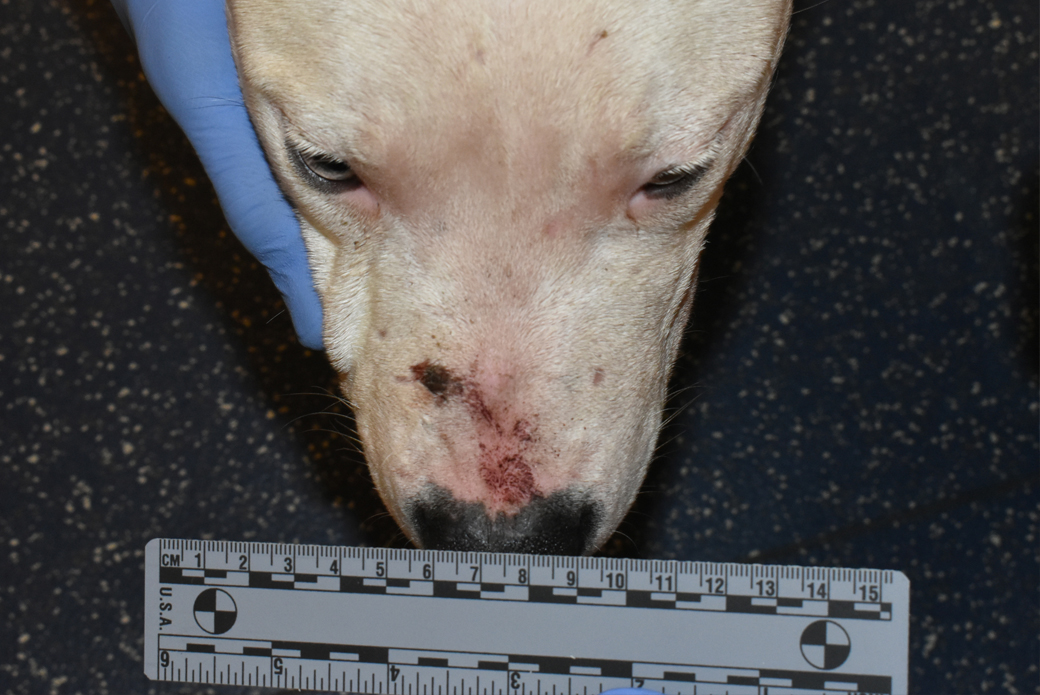 Michigan, who had a scab wound on the bridge of her nose and dried blood stains on her fur, had to be carried to the evaluation room since she wouldn’t walk.

“She stood still and had her tail tucked for the majority of her evaluation,” Christina says.

Christina and her team quickly learned that the pair of seven-month-old siblings were the most fearful of the group, but they were best friends.

“When they were reunited, they immediately started to play,” she says. “It was clear they were each other’s support system.”

It was also clear that finding a home together for two large dogs would be a challenge. 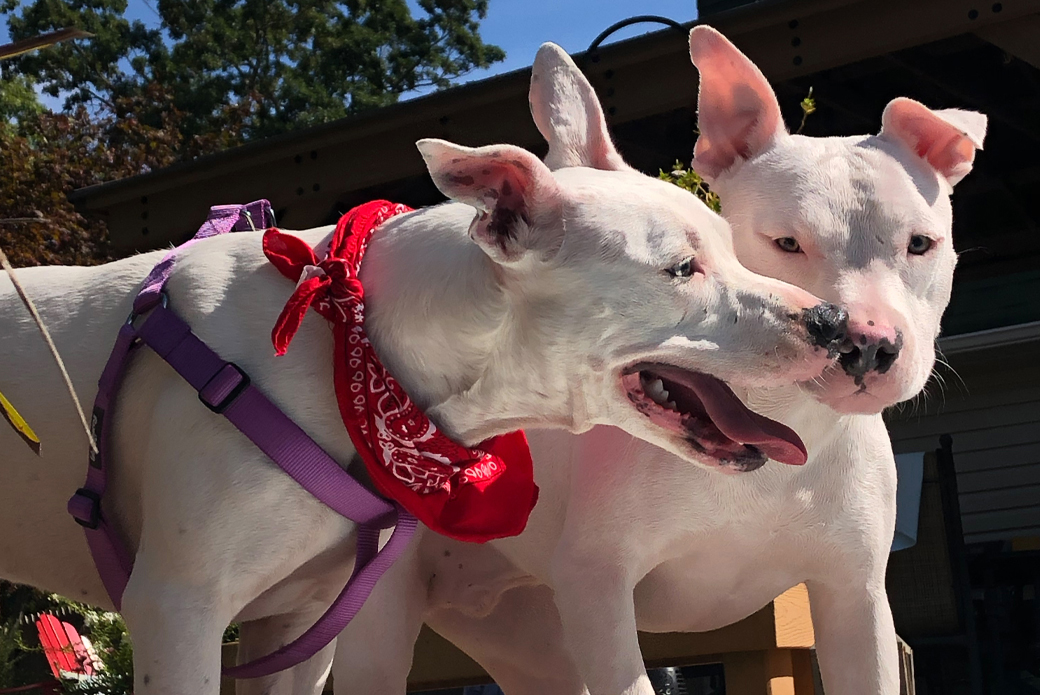 Michigan, left, and Erie, now Ellie and Jack, at home. 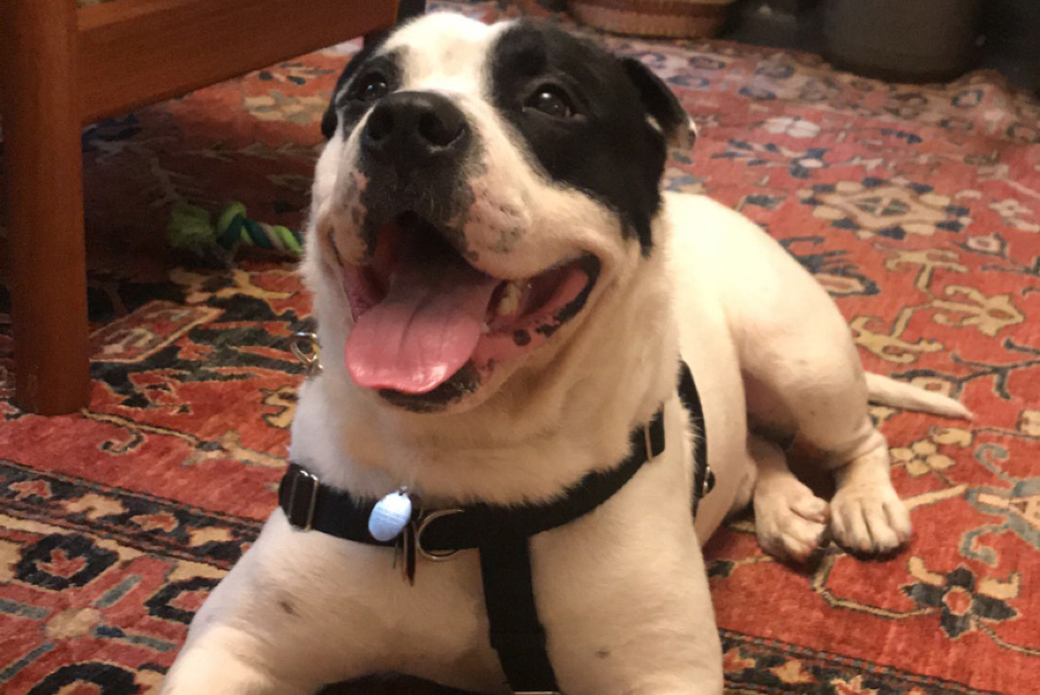 Huron in his new home.

Five-year-old Huron was thin and suffered from dental disease but was also friendly and easily learned basic commands. The Behavior Team also helped him improve some leash reactivity challenges.

It wasn’t long before he was also ready for adoption but facing the same obstacles as Erie and Michigan.

A Home for Two

Paul Mayr knew his neighbors, Christine and Chuck M., had recently lost their two beloved dogs within a matter of months of one another.  He showed them photos of Erie and Michigan, stating that they needed to be adopted together. Christine wasn’t sure if she was ready to adopt two young dogs after raising three children, but after talking to Chuck, their daughter, Nicolette, and sons, she phoned Christina. This led to Paul arranging a meet-and-greet. 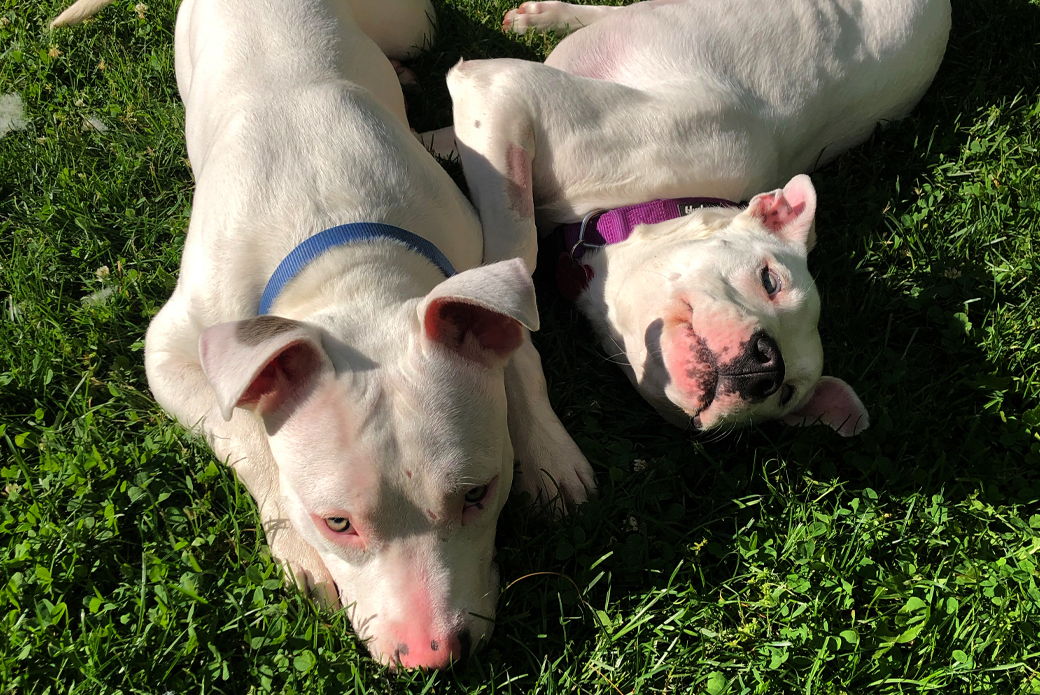 Above and below: Michigan, left, and Erie outside their Long Island home.

“It was the first time any of us had been out during the pandemic,” says Nicolette.  “We were isolated, depressed and still mourning the loss our own dogs, but our family decided to move ahead. We drove to NYC to meet them and they greeted us, played with one another and we all went for a walk. We fell in love with them.”

On May 28, 2020, Christina, Chuck and the rest of the family adopted the pair, now called Jack and Ellie. 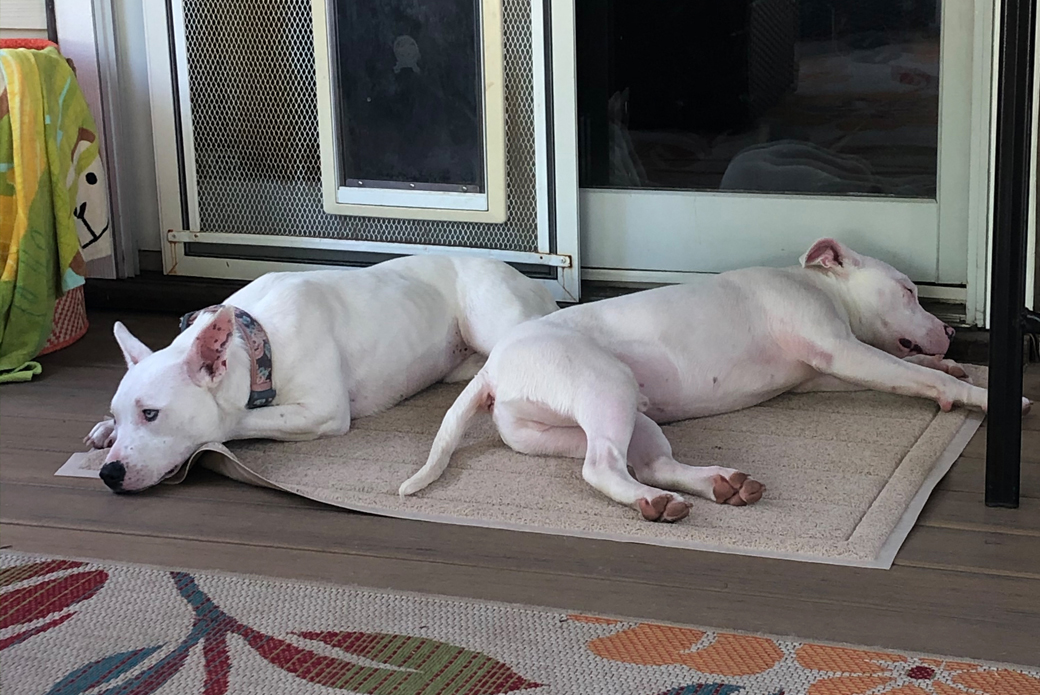 “You might say that Jack and Ellie found us,” says Christine. “They settled in nicely, even befriended chickens that live on our property in a quiet Long Island neighborhood. Some days they are like toddlers, getting into everything, but they respond very well and listen. They are calm, social and loving, and they have brought us such joy.”

A Home for Huron

While the other pups settled into their new lives, Huron was the last to meet his perfect match. Makenna F. and her husband, Brennan, had applied to adopt another dog from the ASPCA, but after learning that dog had been adopted, Solangel Rojas, an ASPCA Matchmaker, suggested they meet Huron. 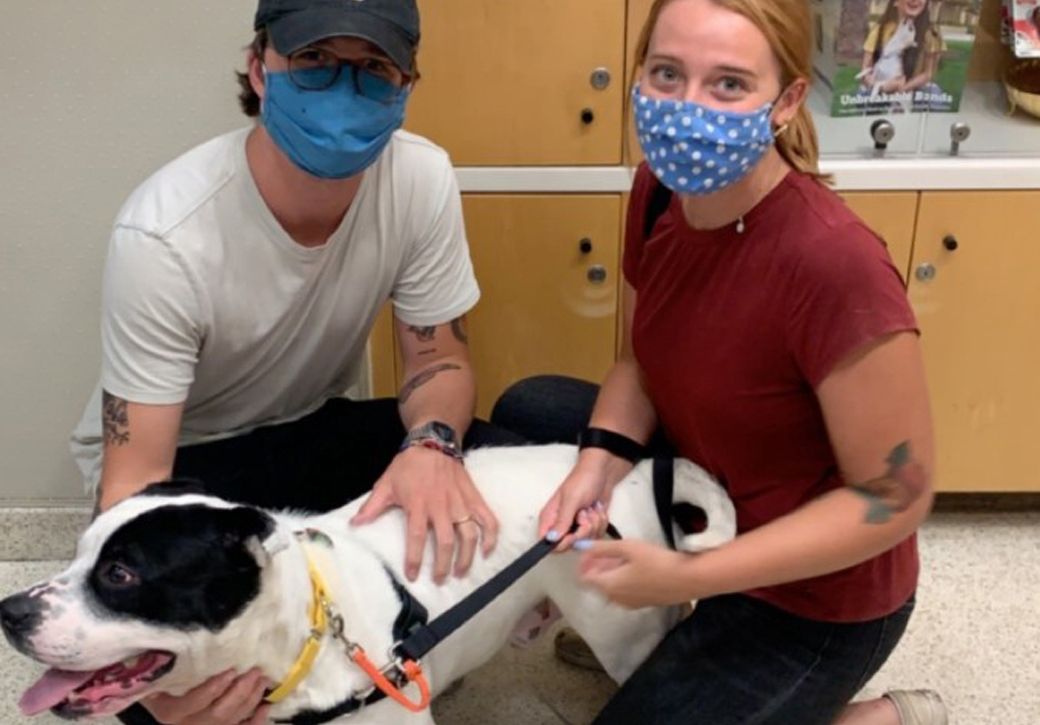 Huron with Makenna and Brennan on adoption day.

Makenna and Brennan met Huron over a Zoom call with his foster caregiver and later spoke with Christina and her team. On July 8, they officially adopted him.

“The remote adoption process was easy and quick,” says Makenna, a first-time ASPCA adopter. “The behavior and adoption teams were open to questions and offered assistance, and we always felt supported.” 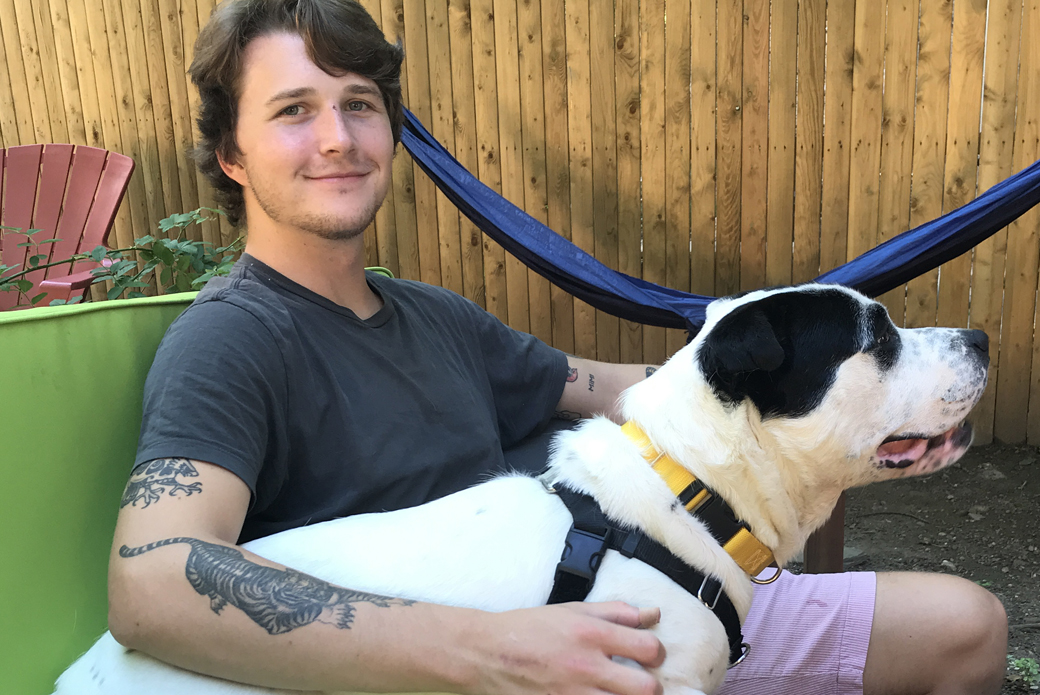 Above and below: Brennan with Huron, now Huey.

Quarantining during COVID-19 provided time for Huron—now called Huey—to bond with the couple and their four-year-old cat, Moz.

“We wanted to make his adjustment as safe and comfortable as possible,” says Makenna, adding that Huey rode on her lap in the car all the way home to Brooklyn. “He loves to love and is all about affection. It's clear that he was supposed to be a part of our family. He's such a fantastic pup, and we couldn't be happier to have him.” 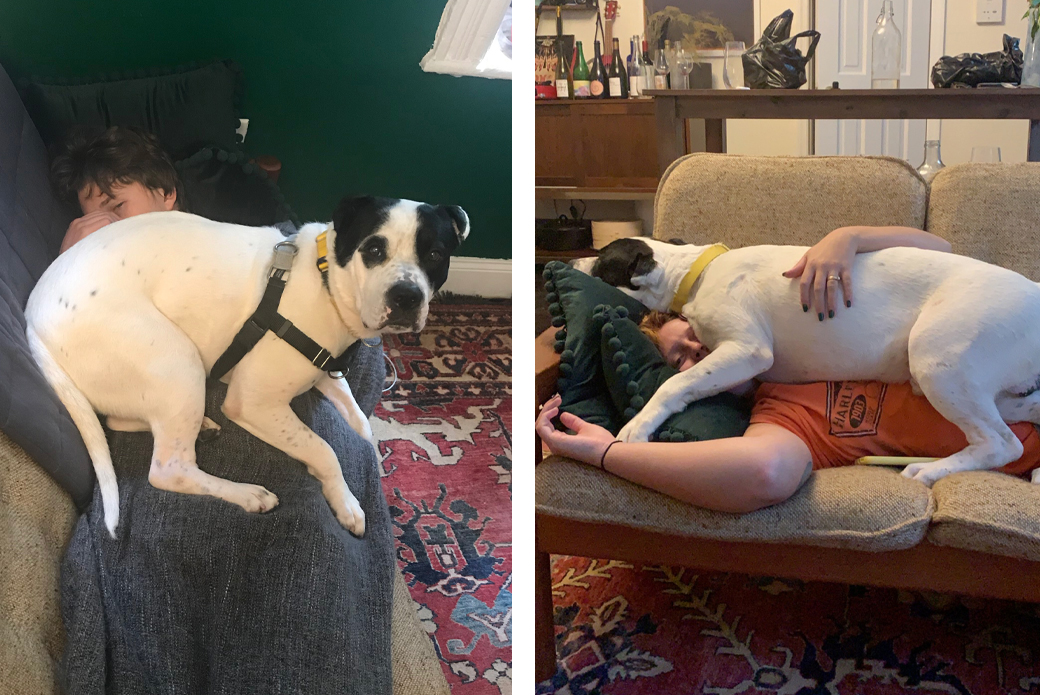 No longer “lakes,” these four dogs don’t just share a dark history, they now share bright futures with families who love and care for them.