The ASPCA released new data from a nationally representative survey confirming that more than one in five pet owners have evacuated their homes due to a disaster or emergency and nearly half left at least one pet behind when they evacuated. Additionally, 83% of current pet owners reported living in a community that faces natural disasters. On the heels of the catastrophic Hurricane Ida, and with Tropical Storm Nicholas putting millions of people at risk of flash flooding, the ASPCA is strongly urging pet owners to include their pets in all disaster plans, especially those involving potential evacuations.

The new data also revealed that nearly 40% of pet owning evacuees did not return to their homes for at least four days, and in some cases up to two weeks. Leaving a pet behind can expose them to numerous life-threatening hazards including the inability to escape the impending emergency—such as flood waters, fires, and high winds—as well as having no access to fresh food and water for an unknown period of time. 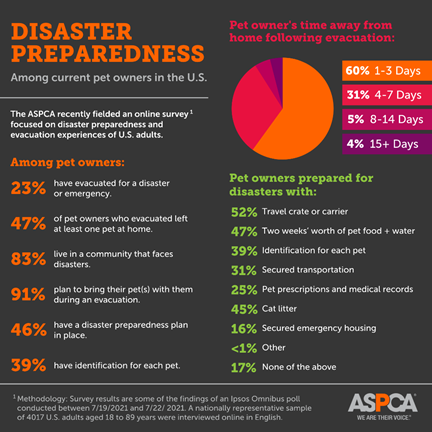 “These alarming survey results—as well as our own experiences responding to Hurricane Ida and other crises—demonstrate the vital need for effective preparedness tactics among pet owners, as well as local and national measures that protect vulnerable animals,” said Matt Bershadker, President & CEO of the ASPCA. “Millions of families rely on their pets for comfort and joy, and pets rely on their owners for safety and shelter. Now is the time to develop and encourage plans that will keep pets safe and families together when disasters strike.”

While more than 90% of pet owners said they would bring their pet with them during an evacuation, only 46% of pet owners have a disaster preparedness plan in place. Of pet owners surveyed, 84% don’t have emergency pet-friendly housing secured, and 68% support government funding for emergency pet-friendly housing that makes it easier for pet owners to evacuate with their pets. The ASPCA is working with lawmakers to increase access to co-sheltering opportunities, a housing approach that keeps people and pets together when they are displaced by disasters.

Of those who left at least one pet behind, nearly 30% cited not having enough time when the disaster struck, further emphasizing the need to prepare for an emergency situation in advance. Creating a portable pet emergency kit with essential items such as medical records, pet food, water, bowls, and your pet’s medication is a key step in preparing for a potential evacuation.