From Hiding to Hiking: Binney’s New Lease on Life

As a Registered Veterinary Technician and aspiring dog behaviorist, April K. is passionate about the work of the ASPCA Behavioral Rehabilitation Center (BRC), where she serves as a foster parent and volunteer. In December 2019, April offered to foster a recent graduate—rescued dog Binney—from the program.

After treatment at the BRC, undersocialized dogs often benefit from a structured home environment where they can continue to learn about the world and prepare for life with future adopters.

When April brought Binney home, it wasn’t long before her resident dog, Little Buddy, let her know that Binney had found his family.

Binney was a stray roaming around Columbia County, Florida, until he was finally captured in February 2019 by local authorities and taken to a local animal welfare organization.

Estimated to be about one year old, Binney may never have known a loving home. Described at the shelter as “completely shut down,” “aggressive,” and “feral”—they were unable to handle him at all.

These were all typical descriptions of BRC candidates—unadoptable dogs whose fear is so severe it compromises their quality of life. It was clear Binney needed professional help for him to find a home.

Binney was transferred to the BRC in Weaverville, North Carolina in April 2019 to start the next chapter of his journey.

Binney would flee to the back of his kennel or hide to avoid humans. He was extremely fearful.

After a few months in the program, Binney slowly learned that people were not as scary as they seemed.  Staff used “tools,” such as food, toys, fun experiences, frequent enrichment, and other confident dogs called “helper dogs,” to gradually engage with Binney. Over time and many treatment sessions, Binney was able to progress and build relationships with the team.

“When Binney started treatment with us, he was aloof around other dogs, at times snapping at them if they got too close,” recalls Jenny White, Behavior Rehabilitation Specialist. “As his stress level and fear reduced, he began making friends with other canines. He enjoyed playing chase and tugging with his pals as he became more comfortable and confident in the world. We found the key to this spunky little guy's heart was through fun activities like dog play, jogging, fetch and nose work.” 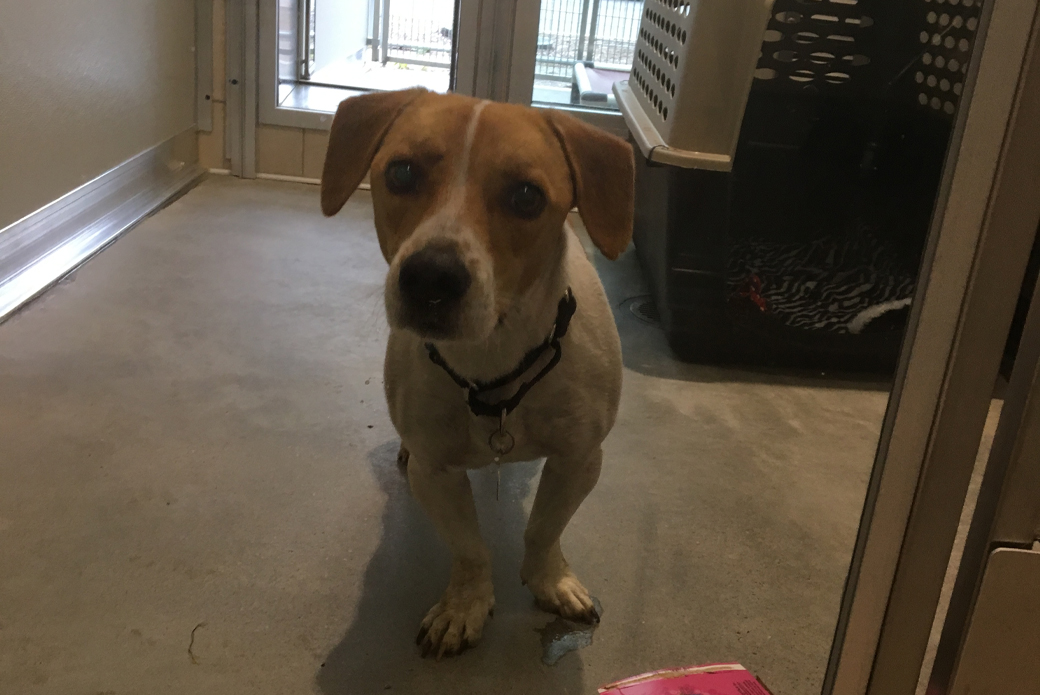 Binney graduated from the rehabilitation program in July 2019. By completing the program, Binney had significantly improved from the shut-down, young dog we met in February, but a graduation is not the end of learning for our BRC dogs. They need patient adopters who will help them to continue to build their confidence in the world and conquer their fears as they begin their new lives.

After an unsuccessful placement, Binney was still looking for an understanding adopter.

April stepped up to foster Binney in December 2019, as she was familiar with the program and willing to use kindness and a gentle approach to build on what he learned at the BRC while the staff looked for his new adoptive home.

“The day I met Binney he paid little to no attention to me or my Beagle, Little Buddy,” recalls April. “He wanted mostly to create distance and would come around for cheese.”

With time, Binney became acclimated to his new environment and started to show much more personality. He even took a surprising shine to his foster brother! 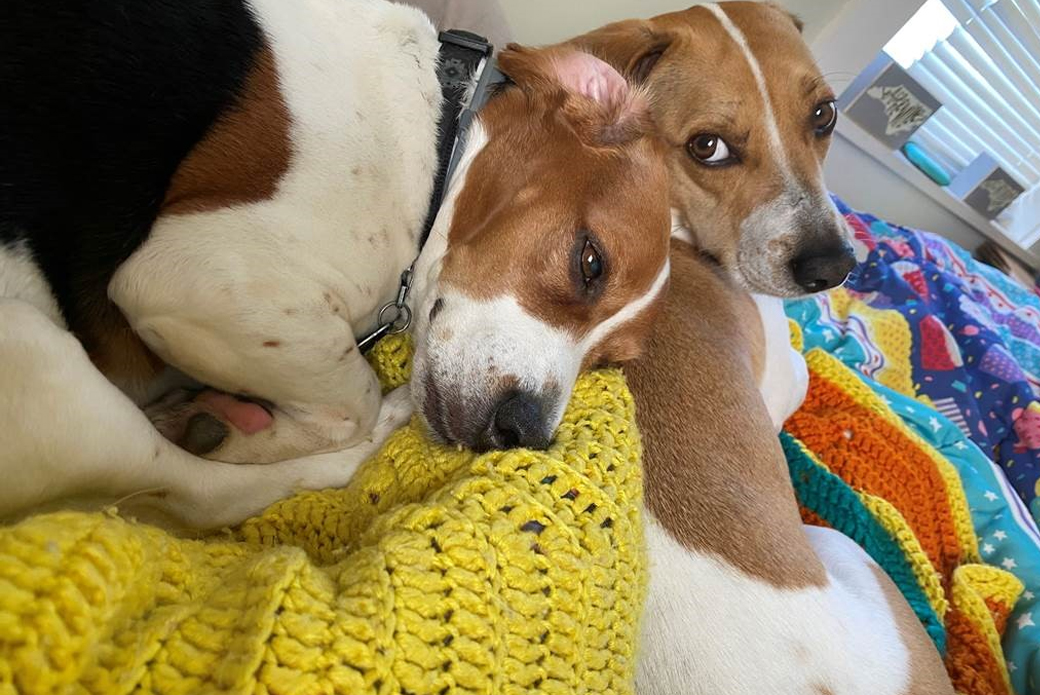 “Little Buddy does not typically play, and every day they were playing with each other in the yard,” April tells us. “I knew then that Little Buddy had chosen Binney to be part of our lives.”

April officially added Binney to their family in February 2020. 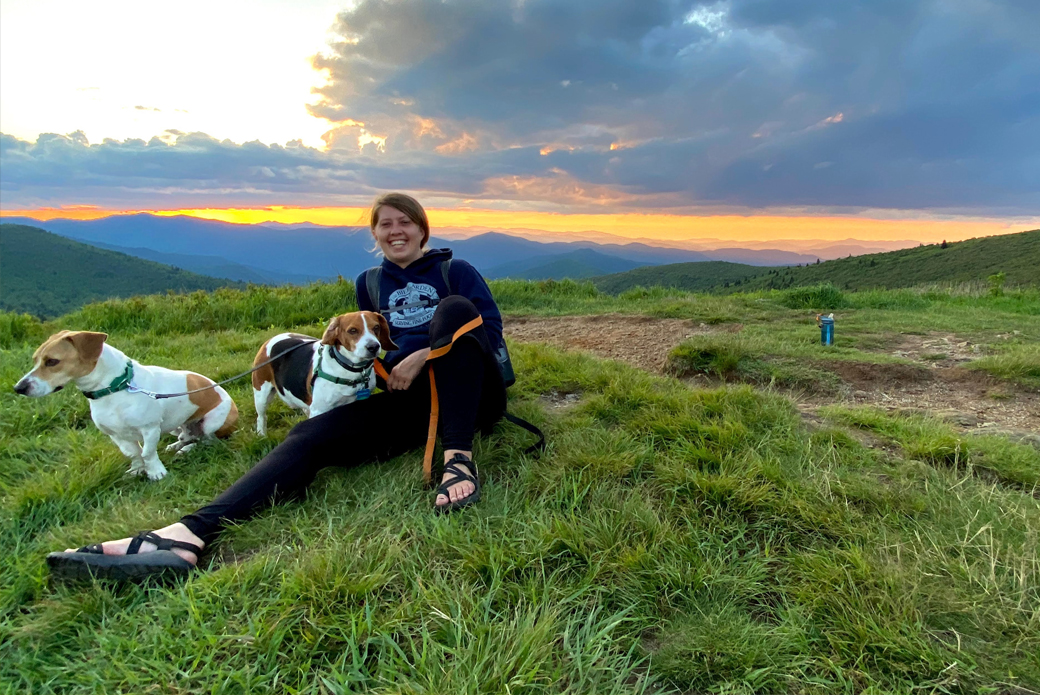 Months later, Binney is now happier than ever.

“He lives with three other dogs and does so well. He is bonded to my beagle [Little Buddy] and now is my little side-kick,” April shares. “At times it has to be managed to prevent separation anxiety, but he definitely cuddles me and asks for attention often!” 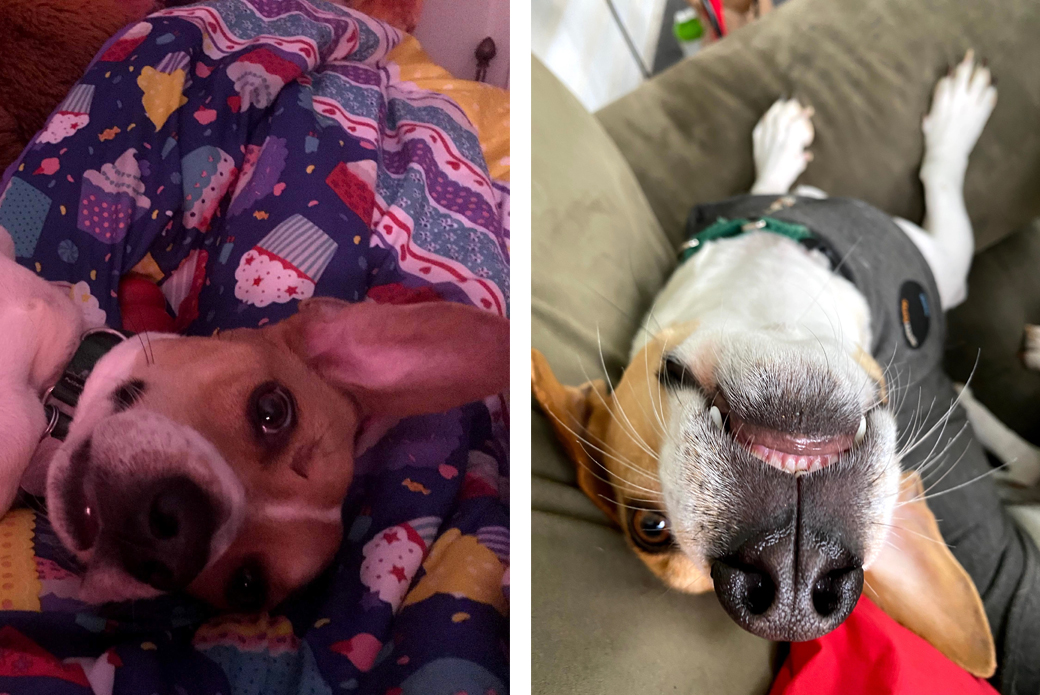 With his history largely unknown, April was careful to introduce new things to Binney very slowly to keep fear and stress to a minimum—sometimes with surprising results!

“I’m learning everyday new things about him that make me think that he’s lived a certain way,” says April “For example, I pulled out my camping tent to set up and do some training with him to get used to it. Assuming he would be fearful of it, I was wrong! He immediately got excited and started rubbing all over it and jumped in like he knew exactly what it was.”

Today, Binney is most comfortable in the great outdoors. Possibly a reminder of his early life before he was rescued. 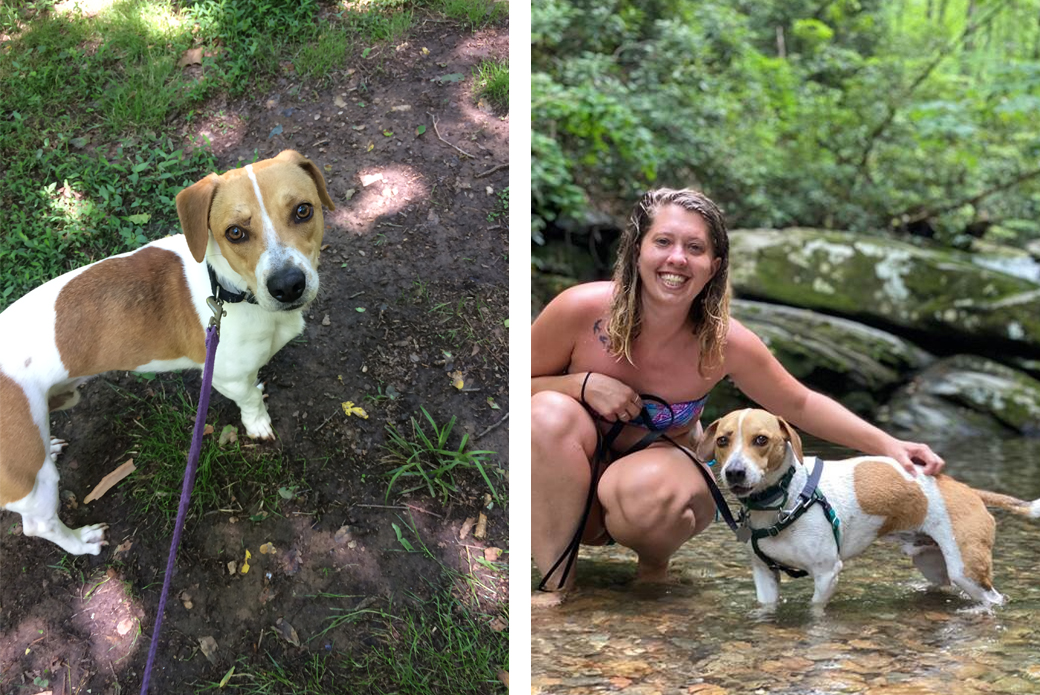 “We explore beautiful places together, and he thrives as a hiking dog! He loves to smell and is learning to swim!”

While his life on the streets before the ASPCA and April is a mystery, we can be sure that now his life is filled with love, cuddles and hiking with his family!