Clicker training may seem like a natural activity for dogs, but more and more, cats at the ASPCA are being trained with this method of positive reinforcement during which a clicker—a metal cricket-sounding noisemaker—helps them learn a behavior or stunt that has scrumptious rewards.

Dianne Weisheit, an ASPCA volunteer who helps clicker train cats, agrees. “All cats need exercise,” she says. “However, just like people, the type(s) and amount of exercise depends on the age, energy level and physical condition of the cat.”

At the ASPCA, Dianne chooses cats that have been up for adoption for longer periods of time.  “I especially enjoy socializing cats that have medical or behavioral problems, or have been here awhile,” says Dianne, who volunteers approximately 15 hours a week. “They need stimulation, too.”

Dianne has trained cats to do tricks like “high five,” go readily into a carrier, and jump over hurdles and through hoops that her brother builds her from PVC pipe. “Most cats will let you know what type of exercise they enjoy by the toys they choose or the games they prefer to play,” she adds.

Mobley the cat jumps through hoops.

ASPCA cats are offered a plethora of playtime prerogatives: swatting at toys on wands; fetching crumpled paper balls; pouncing on toy mice; chasing laser lights; and climbing onto high perches.  But for especially active cats, and those who thrive on mental stimulation, clicker training is an excellent form of exercise.

“It really isn’t difficult to clicker train a cat,” says ASPCA volunteer Lauri Goldman, who also serves as an Adoptions Counselor and assesses adoptable cats. “You begin by just clicking and treating to get the cat used to the clicker,” she explains. “You try to evince the behaviors you want to reinforce by watching and coaxing. The minute the cat performs the desired action, you immediately click and treat so the cat associates the click with the treat.” 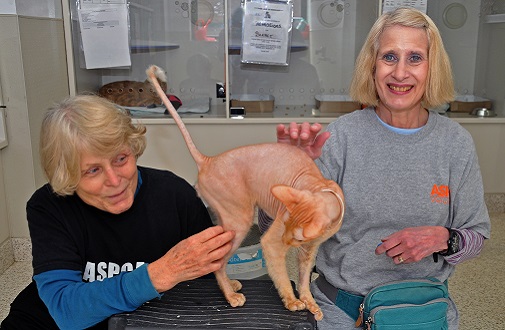 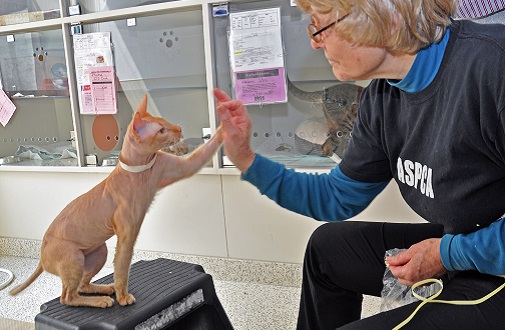 For Mobley, an active and vocal wide-eyed Cornish Rex transferred from Animal Care Centers of NYC, the hoops and hurdles were the perfect play activity. The frisky feline learned to dutifully jump through hoops in anticipation of a click, and ultimately, the tasty snacks that immediately followed.

“We chose Mobley because he was eager, agile, and loved interaction with people,” said Lauri. “He needed a workout. And the extra food didn’t hurt.” Mobley needed a little extra time to recover from infections, so he was the perfect candidate for extra socialization, and Lauri and Dianne worked with him often. He has since been adopted and continues his talkative and acrobatic feats in his new home, where he is best buddies with a 7-year-old human, two dogs, and another cat.

“Some cats don’t seem to have an ‘off’ button when it comes to playtime,” says Blair. “Regardless of a cat’s energy level, exercise should be frequent enough to tire out the cat. If one is good with a hammer and nails, ‘catifying’ one’s house—building shelves, stairs and posts for the cat to climb on—can also be very enriching for the cat.”

“Without enough exercise,” Lauri points out, “Cats will find ways to entertain themselves which could be destructive.”

Our volunteers are always looking for good clicker candidates, and after Mobley was adopted they began working with Leo and Raz, a pair of black-and-white tuxedo cats. Both are making great progress in their training, and we are hoping that their eagerness to learn will translate into the ultimate reward: adoption. 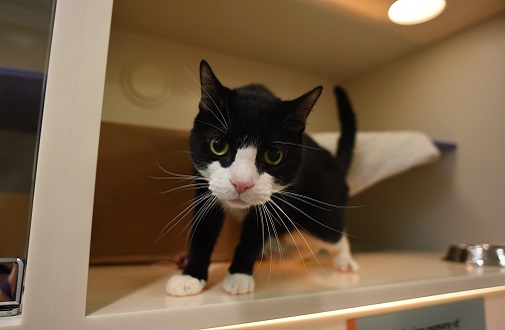 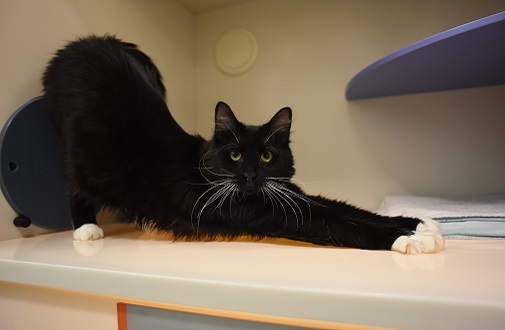 Raz and Leo, the latest cats to receive clicker training, are currently available for adoption

"Cats may have lived outside for thousands of years prior to becoming indoor pets,” adds Blair, “but they did not leave their personalities—or exercise needs—at the door."