At the end of September, the ASPCA hosted an extra special cat adoption event in New York City in partnership with kate spade new york and local fashion blogger, Man Repeller. The event included a feline-inspired kate spade new york pop-up shop, appropriately dubbed “Leopard Leopard Leopard,” and a custom-wrapped ASPCA mobile adoption van featuring impossible-to-miss leopard spots. The pop-up shop was a two-day event that finished with the ASPCA hosting on-site adoptions. A portion of the sales from the event went to the ASPCA, and each of the eight guests who adopted a kitten during the event received a limited-edition kate spade new york cat bed—featuring leopard fabric, of course.

This fun adoption event was a huge success, and it was also a very special day for one member of the kate spade new york team, as she and her family were able to bring a new furry friend into their lives. 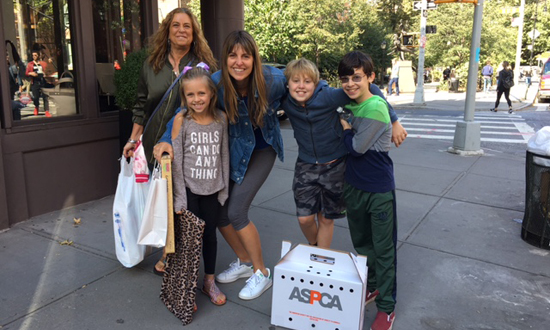 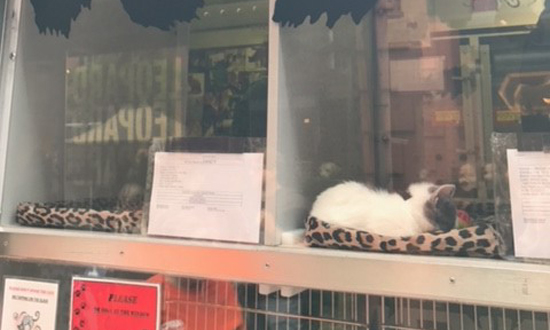 Lalena Luba, Vice President of Global Public Relations for kate spade new york, has been with the company for three years now and tells us that philanthropy, for the ASPCA in particular, is an important part of their brand. “It all begins with our CCO, Deborah Lloyd’s love of animals. She and I really bond over that,” says Lalena. “We also have a culture of animal lovers. I think there is something quite universal about animals, and they are a language in themselves that our corporate community, as well as our current and future customers, are all connected by.”

Lalena lives a busy life in New York City, so she, her husband Mike and their two children Stella and Jake try to escape the city for some peace and quiet as much as they can. But when it came time for this exciting partnership and pop-up shop, there was no doubt that this would be an event for the whole family.

“When we decided to partner with Man Repeller on a pop-up store around our stand-out leopard product, we couldn’t think of a better way to add a special layer than to give proceeds to the ASPCA! It was such a wonderful added element,” Lalena tells us. “The event was such a great platform to spread the word about cat adoption. Also, because our company is such a group of animal lovers, the whole office was buzzing with excitement about the adoption day.”

This event gave Lalena and her family the purr-fect opportunity to finally bring a new member into their family. Jake had been asking Lalena and Mike for a cat for some time, and he’d worked all summer to prove to his parents that he was responsible enough to care for a kitten on his own. “When we confirmed the event with the ASPCA, it was the perfect time to get our kitty,” Lalena says. “I showed Jake photos of the truck, and explained how important it is to adopt versus getting a kitty from a pet store and what that meant.” 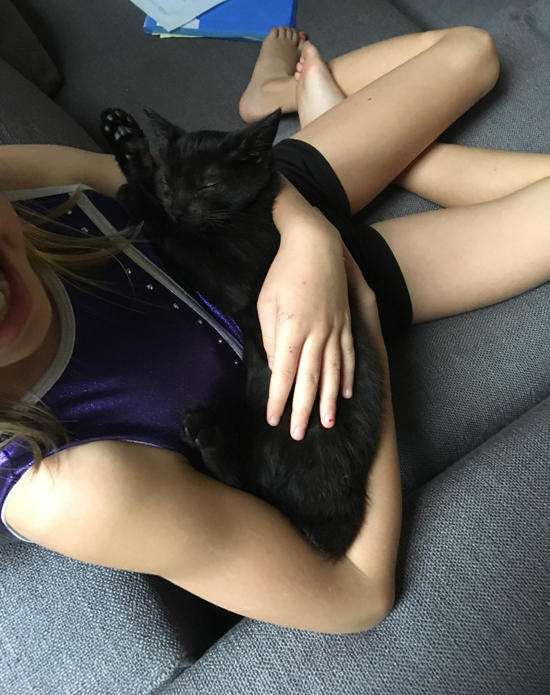 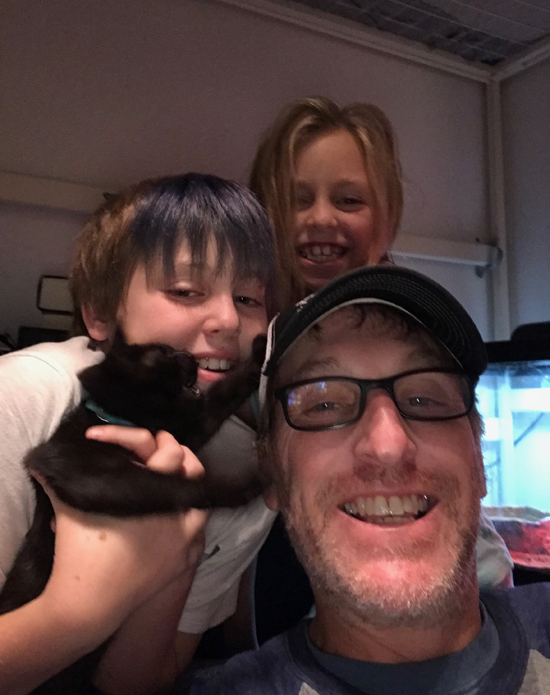 So on that Saturday, September 30, Lalena and her kids anxiously waited for the adoption van to pull up, knowing that their future pet was waiting inside. Though the kids spent a lot of time pouring over the adorable kittens inside the van, there was one black-and-white kitten who stood out. After the ASPCA adoption team prepped the kids on everything they needed to know about caring for their new friend, Lalena made the adoption official.

At the time, Jake was reading a book series about cats called The Warriors, and from that series he found the inspiration for their kitty’s new name—Luna Dawn.

Lalena tells us that life with Luna has changed a lot, but for the better! Luna has truly become the light of their lives and is described as adorable, feisty and sweet—a classic lady. “Our kids take her everywhere with them,” Lalena says. They make videos of her - she even has her own Instagram she shares with Jake’s bearded dragon!” As for Jake, he’s been staying on top of his kitten-duty responsibilities, even calling in to check on her upcoming veterinary appointments.

When asked about what advice she would have for those considering adoption, Lalena has two words: “Do it!” adding, “The great thing about shelter animals is that they have an amazing spirit. There is nothing like a pet—it is life changing and important for everyone to do. If you think you are not a pet person, you just haven’t found the right one!”