A Closer Look at Community Cats

Common Misconceptions and Ways to Help

While the number of community cats in the United States is estimated to be in the tens of millions, sadly, many communities still opt to control populations using outdated, ineffective methods. Community cats who end up in shelters make up a large percentage of cats euthanized throughout the country every year. The ASPCA supports Trap-Neuter-Return-Monitor (TNRM) as a humane and effective method to manage community cat populations.

What is a Community Cat?

“Community Cats” is a term used to describe outdoor, unowned, free-roaming cats. These cats can be friendly, feral, adults, kittens, healthy, sick, altered and/or unaltered. They may or may not have a caretaker. A caretaker is a person who conducts TNRM and provides care to a community cat, but who is not the legal owner. By this definition, the only outdoor free-roaming cats who are not community cats are those who have an owner.

Community cats—who have a dedicated caretaker who provides them with spay/neuter services and regular feedings—can live contently outdoors.

TNRM is the method of humanely trapping community cats, having them spayed or neutered and vaccinated against rabies, and then returning them to their managed location to live out their lives. TNRM also involves a cat caretaker who provides food and monitors the cats' wellbeing as well as identifying and quickly trapping new intact cats. TNRM has been shown to be the most humane, efficient way of stabilizing community cat populations. By sterilizing at least 75% of cats in a group within a six-month period (and continuing to sterilize at least 75% of the remaining intact cats), TNRM helps stabilize the population of community cats and, over time, reduce the number of cats. The goal is to sterilize all cats present and monitor the location for any intact newcomers. Nuisance behaviors such as spraying, excessive noisemaking and fighting are also largely eliminated and no additional kittens are born.

By stabilizing the population, cats will naturally have more space, shelter and food and fewer risks of disease. After being spayed or neutered, cats living in a managed group tend to gain weight and live healthier lives. Spayed cats are less likely to develop breast cancer and will not be at risk for ovarian or uterine cancer, while neutered males will not get testicular cancer. Neutering male cats also reduces the risk of injury and infection, since intact males have a natural instinct to fight with other cats. Spaying also means female cats do not go into heat. That means they attract fewer tom cats to the area, which reduces fighting and mating.

How to Help Community Cats and Kittens in Your Area

What is Ear-Tipping and Why Is It Important?

Ear-tipping is a widely accepted means of marking a community cat who has been spayed or neutered. Ear-tipping is the humane, safe surgical removal of the top quarter-inch of the left or right ear. The procedure is performed by a licensed veterinarian, typically during the spay/neuter surgery and rarely requires aftercare. Ear-tipping prevents an already-spayed or neutered cat the stress of re-trapping and an unnecessary surgery.

Some community cats are actually stray cats who don't exhibit feral behaviors but rather are friendly and enjoy interaction with humans. These cats were likely once owned or have a caretaker who frequently cares for and interacts with them. It is very important to take caution, especially with cats who seem to straddle the fence between a community cat and a stray cat. Even though they might encourage petting or follow you around, they could likely be inadequately prepared for adoption and an indoor life. These cats don’t need intervention, other than TNRM, unless they’re ill or injured. Talking to local community members about the history of a specific cat or group of cats in the neighborhood may help you discern if the cat is being cared for and how you can best help. 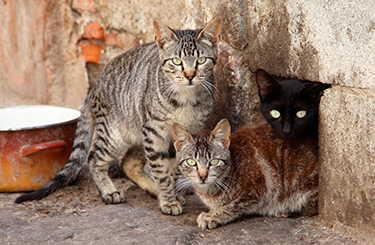