The United States raises and slaughters almost 10 times more birds than any other type of animal. Approximately 9 billion chickens are killed for their meat every year, while another 300 million chickens are used in egg production. All birds—meat chickens, egg-laying hens, turkeys, ducks, geese and others—are excluded from all federal animal protection laws. By sheer number, these are the animals most urgently in need of protection. The ASPCA is working actively with companies that buy or raise chickens to encourage the adoption of higher-welfare practices.

Many people do not realize that the breed of chicken used for modern egg production is different than the breed used for meat production. If you put them next to each other, they look almost nothing alike! Each has been selectively bred for hyper-production: egg-laying hens for high egg volume, and “meat” chickens for rapid growth and maximum breast meat yield. Both types suffer from physical problems brought on by genetic selection for these traits. Read our report [PDF] to learn more about the negative impacts of selective breeding in the chicken meat industry.

Nearly all meat chickens are raised indoors in large sheds containing 20,000 chickens (or more) crowded together on the shed floor. Due to the high concentration of birds living atop of their own waste without adequate ventilation, high ammonia levels develop—irritating eyes, throats and skin.

To keep them eating and growing, industrial farms restrict chickens’ sleep by keeping the lights on almost all the time. As they grow, meat chickens become crowded together, competing for space. This constant interaction makes sleep even harder [PDF]. As chickens die, their bodies are sometimes left among the living, adding to the stress and unhygienic conditions.

The roughly 330 million egg-laying hens [PDF] in the U.S. are mostly raised in long, windowless sheds containing rows of stacked “battery cages.” Up to 10 hens are packed together in one wire cage roughly the size of a file drawer. The frustration of living in such unnatural conditions leads to abnormal pecking behavior and cannibalism. To “fix” this problem, the industry burns or cuts off a portion of hens’ sensitive beaks. With cages stacked and birds crowded together, workers may not be able to access or see all their birds, leaving sick or injured hens to suffer or die.

Since eggs are laid only by females, what happens to the males? Half of the chicks hatched in this industry are male, but there’s no market for male chicks born with egg-layer genetics since they’re slow-growing and lanky, so they are killed at the hatchery.

Hens whose egg production drops due to age are either killed on farm or sent to slaughter. Some farms will withhold proper nutrition for up to two weeks to shock the bird’s body into a molt to kickstart a final laying cycle.

The ASPCA is working actively with companies that buy eggs or raise hens to encourage the adoption of higher-welfare practices.

The U.S. raises around 120 million pigs for food each year, the vast majority [PDF] of whom are raised in barren crates or pens at industrial-scale facilities without fresh air or sunlight. They live on hard, slatted floors that do not accommodate their natural urge to root. Ammonia fumes rise to dangerous, uncomfortable levels due to high concentrations of waste. The ASPCA is working actively with companies that buy pork or raise pigs to encourage the adoption of higher-welfare practices.

Pigs tend to be curious and intelligent animals, so barren surroundings can cause frustration exhibited in abnormal behavior like tail-biting. To “fix” this, the industry has adopted a common practice of cutting off a portion of pigs’ tails and/or their teeth, without painkillers.

Most female breeding pigs (sows) in the U.S. spend their reproductive lives confined to a gestation crate. These crates are barely bigger than the sow’s body and prohibit her from turning around. Sows are artificially inseminated and kept in their gestation stalls until a few days before delivering, at which time they are moved to equally restrictive farrowing crates to give birth. They remain there while nursing their young, and then are placed back in their gestation crates and re-inseminated. This cycle continues for several years, until the sows are no longer as productive and are sent to slaughter.

Cattle are raised and processed across several distinct industries with differing practices and welfare concerns. The ASPCA is working actively with companies that raise cattle or buy their products (beef, dairy or veal) to encourage the adoption of higher-welfare practices.

Cattle raised for beef are the only farm animals still raised largely outdoors. Sometime between the ages of six months and one year, most beef cattle are sent to live their last few months in feedlots with hundreds or thousands of others. Without vegetated pasture and often without shelter, the cattle may suffer from digestive distress from being fed corn and other foods not natural to ruminants, as well as from heat stress, muddy conditions and respiratory issues from dust.

Routine practices that cause pain and distress for cattle include branding and castration. Beef cattle may also often endure several long transport events, which are stressful for animals and are inadequately regulated.

Most cows used for dairy production are kept indoors, with some having access to outdoor concrete or dirt paddocks. Many are tethered by chains or other materials around their necks in what are called “tie stalls.” Unnaturally high milk production can lead to mastitis, a painful bacterial infection of a cow’s udder. Dairy cows often have up to two-thirds of their tails and their horns removed without painkillers.

Just as with humans, cows only produce milk as a side effect of giving birth. To keep the milk flowing, dairy farms artificially inseminate cows once a year. Their gestation period lasts nine months, so the majority of most dairy cows’ lives are spent pregnant. When a calf is born, he or she is removed from the mother—generally that same day—to make the mother’s milk available for collection. This can be hugely traumatic to mother cows and to their calves. Male offspring are often raised for veal, while females become the next generation of dairy cows.

While large-scale dairy operations are typically separate from beef cattle operations, these industries are connected. Dairy cows usually end up at beef slaughterhouses when, at two to five years of age, their milk production has slowed or they are too crippled or ill to continue in the industry. At that point, they are slaughtered for beef.

Veal is the meat of young cattle who are usually born to dairy cows. As males, veal calves are of little use to the dairy industry, and as a dairy breed, they are inefficient beef-producers.

Traditional veal meat was made pale and tender by restricting calves’ diets and keeping them in stalls so small they could barely move. Increasingly, calves are housed in groups beginning at about six weeks old, but they still lack sufficient space, enrichment, outdoor exercise, solid food and the fulfillment of a basic instinct to suckle.

Approximately 240 million turkeys [PDF] are raised for meat in the U.S. annually. Like chickens, turkeys suffer from growth-related lameness and are housed in groups on the floors of long sheds where they are denied fresh air, sunshine and pasture. Turkeys also develop abnormal behaviors in these environments, which can result in cannibalism. The ASPCA is working actively with companies that raise turkeys or buy turkey to encourage the adoption of higher-welfare practices.

Modern, industrially raised turkeys look very little like their wild ancestors. For one, they are disproportionately breast-heavy (a result of genetic selection), reflecting a consumer preference for breast meat. Their unnaturally fast and disproportionate growth causes painful physical ailments and difficulty walking or even breathing.

Turkeys have become so unnaturally disproportionate that they can no longer mate with one another. Their bodies, which were only meant to reproduce once per year, are further damaged by year-round artificial insemination.

There is a common misconception that fish and other aquatic vertebrates do not feel pain; however, studies demonstrate that they are sentient and capable of both fear and suffering [PDF]. Aquaculture—the farming of fish and other aquatic species—is one of the fastest-growing areas of food production, surpassing global beef production. About half of all consumed fish—namely salmon, tuna, cod, trout and halibut—are raised in artificial environments, as opposed to being wild-caught, creating a number of welfare concerns.

As on industrial land-based farms, farmed fish are often housed in overcrowded conditions ripe for injury, disease transfer and stress. Industrial fisheries are reliant on antibiotics to treat the parasites and diseases promoted by these unnatural conditions.

As there are no regulations around the humane treatment of fish, they most often are not stunned before slaughter, meaning that they are fully conscious. They are killed by bleeding out, blunt force, suffocation or freezing.

95%
of farm animals in the U.S. are raised in factory farms.
10 billion+
animals are raised for food each year.
Join the ASPCA in the fight against farm animal cruelty today. Donate 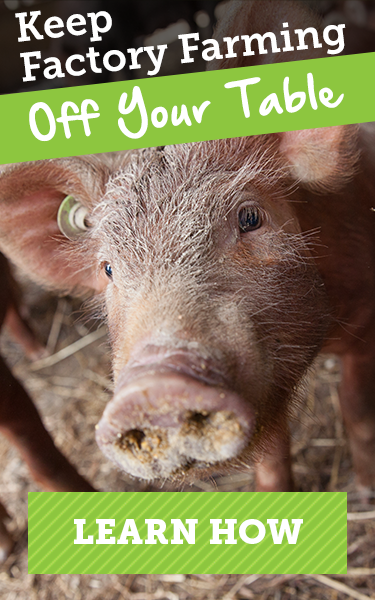