Meet Henry! This handsome boy is very social, confident and playful. Henry has never met a stranger and loves everyone he meets.

Henry is currently in a foster home with Skittles, another adult cat around his age. Henry and Skittles didn’t know each other before they were in a foster home together, but they are the best of friends!

Henry likes to climb and explore around his home and can be active at night. He is looking for an adopter who can give him lots of designated play time with interactive toys, including food puzzles, wand toys with feathers or ribbons, kicker toys, toy mice he can chase around and different scratching posts. After he has tired himself out from playing, Henry enjoys pets and cuddles and lots of afternoon naps. He also likes to relax by the window where he can watch the world go by.

Henry is very food motivated and loves to eat. His adopter will need to keep an eye on the amount of food he eats but having a playmate will help keep him active!

Henry has a history of play-biting hands or feet when he's in a frisky mood or if he's being pet when he'd rather be playing. His foster has worked closely with us to help address the causes of his biting and redirect his behavior, and our Adoption Team would be happy to pass along their recommendations.

Because Henry has a lot of playful energy and is very outgoing, he would do best with a playmate to keep him company instead of being the only pet in the home. Henry would love to be adopted together with Skittles, or into a home with another friendly and playful cat.

Want to make Henry a part of your family? Complete our online adoption survey to submit an application!

Back to List of Adoptable Cats in Los Angeles 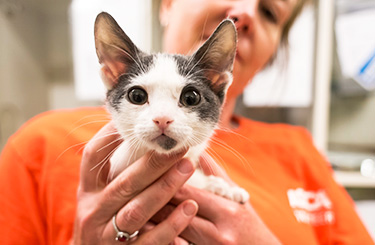 The ASPCA in Los Angeles has cats available for adoption from ASPCA foster homes. Apply Now